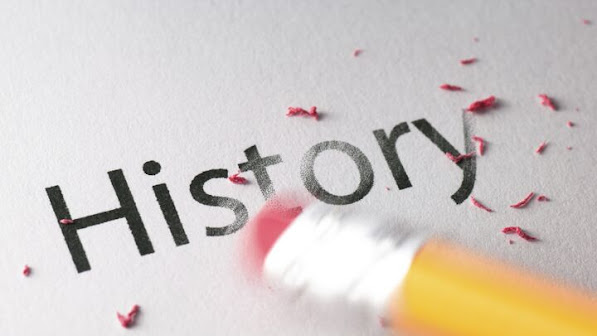 Rewriting History is part of the Jewish Master Plan to control the world. This falls under the category of mind control.  Rewriting history is a way that Jews keep the non Jewish world ignorant about actual historical events which expose the Jews for the evil race that they are and also to present a completely false version of the world that Jews want non Jews to believe is reality.  I describe that false version of the world in the Two Worlds Paradigm.  One way that Jews rewrite history is to hide things which have happened in the past that Jews do not want non Jews to know about.  These past historical events thus become memory holed, which means that they become lost to the general awareness of most people because these events have been purposely hidden from them.  Out of sight means out of mind, and so the general public will not know these things unless they are told about them by a truth teller or unless they do their own research and dig to discover them on their own.  For example, almost everyone knows that Columbus sailed from Spain in 1492 to eventually discover America because that is taught in schools but how many people know that Jews were expelled from Spain in 1492 by Queen Isabella because of bad Jewish behavior in Spain?  Probably very people know that because its been hidden.  I did not know it until I discovered it on my own and I realized that Columbus was one of the Jews who was forcibly expelled from Spain in 1492 and the entire reason for his journey was because of the Jewish expulsion.  That is just one example of Jews rewriting history by purposely hiding information that Jews do not want the general public to know.

Henry Ford was red pilled about the Jews: 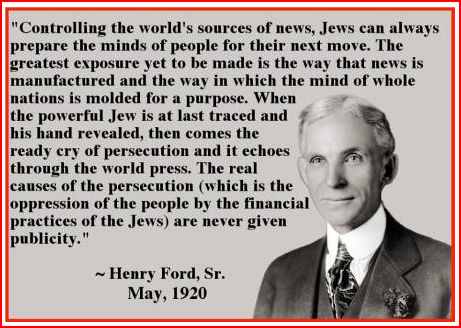 Another thing that has been memory holed is that Henry Ford wrote a large volume of books in the 1920\’s called The International Jew which exposed the Jewish problem.  How many of you reading this know about that?  Probably very few because it, like the Spanish expulsion of 1492 has been purposely memory holed by the Jews.  I was completely ignorant of its existence for most of my life until I happened to discover it on my own while doing other research. I did not know about it because nobody had ever told me about it. That is how memory holing happens.  Jews control the media and public education and everything else and they use that control to hide real history that Jews do not want the public to know.  But the point I am trying to make in these two examples is that one way Jews rewrite history is to hide any history which exposes the Jews for who they are and makes Jews look bad.

Another example where Jews have hidden and rewritten history concerns Jewish Ritual Sacrifice.  Jewish Ritual Sacrifice (JRS) is a real thing where Jews sacrifice non Jews in Jewish Religious rituals but Jews have rewritten history by labelling this entire subject as Blood Libel.  In other words, what Jews want non Jews to believe is that anyone who talks about JRS as a real thing is lying just to slander Jews.  Jews refer to JRS as Hate Speech.  Anything that tells the truth about Jews and reveals them for who they are is by Jewish definition Hate Speech.

Jews have rewritten history on all topics but especially about World War 2 and National Socialistic Germany and Adolf Hitler and about the alleged Holocaust of Six Million Jews being killed.  Jews have rewritten or falsified the history on these four topics more than anything else, so much so that it is very difficult even for me to determine what the truth is about some of these topics.  But the truth about these four subjects is NOT what Jews want you to believe.  Jews have told huge lies to hide the truth and to present a lie as the truth in all four of these cases.

But stepping back to see the forest from the trees, Jews rewrite history to control what the general public thinks and believes, and especially to control what non Jews think and feel about the Jewish race.  Of all the information Jews want to control, they want to control information about themselves to condition the non Jewish world to see Jews as harmless and victims of others and to never see Jews as being evil or aggressors.  Mind control of non Jews is the main purpose behind history revisionism.. Keep the Goyim ignorant and believing that Jews are their friends is the plan until at some point in the future Jews rip off the mask and show the Goyim who they really are.  Remember what happened to Russia after the Bolshevik Revolution?  That is what is going to happen for the entire world when the Jewish mask is taken off.  Its going to be a blood bath for non Jews.  Let the Jewish festival of Purim be a warning to the non Jewish world about how the Jews really feel toward non Jews and what the Jews plan to do someday once they get enough control.  Open your eyes.