The anniversary of that infamous Jewish PSYOP known as 9-11 is almost upon us again and before long all the Jewish main stream media channels from CNN to Fox News to the (False) History Channel and many others are going to be portraying it as a real historical event instead of the pre planned Zionist PSYOP that it actually was.  Its happened every year since 2001 and we can expect it will be done this year and enhanced with the recent Bullshit in Afghanistan.  The timing of this latest Afghanistan PSYOP to take place right before the 20 year anniversary of the 9-11 PSYOP should not be lost on any of the red pilled and this is just another proof that what has happened in Afghanistan recently is exactly what has been planned and intended to happen.  If you are reading this, I hope you are red pilled and not one of the brain dead who believes what they see on TV as being reality.

But I do not want to discuss Afghanistan in this post but 9-11.  Despite all of my efforts and the efforts of people like me to show that 9-11 was a dishonest deceptive PSYOP and not a real terrorist attack on America, I already know that the internet is about to be filled with people talking about 9-11 as a real event in which thousands of Americans died. Even web sites that are created by alleged truthers will be doing this.  There is nothing I can do about such ignorance other than to tell the truth as I know it to be and hope that others see the truth I am telling.  This post is about the collapse of Building 7 of the WTC complex, which you might know nothing about. The main stream media gave almost no coverage to this building\’s collapse while focusing all attention on the collapse of the twin towers and on the Pentagon.  But here is your red pill about Building 7.

Building 7 was a secure building that was fortified. It collapsed in a controlled demolition as perfect as any controlled demolition has ever been, shown at the top of this post.  This building was purposely wired with explosives and brought down by man intentionally.  It did not collapse for any other reason and this controlled demolition collapse exposes the entire 9-11 event as the pre planned PSYOP and FRAUD that it obviously was.  Only a complete idiot would believe that this secure fortified building collapsed so perfectly due to damage or fires.  The reason that the main stream media gave almost no coverage to the building 7 collapse and basically hid it from the public is because if the people saw that it would wake a lot of people up that there was something wrong about 9-11 and we were lied to about it.  What the Jewish main stream media does not want to do is to wake people up to the truth so they hid this, to the point that most Americans today probably do not even know that a third building collapsed that day.

There are a few more secrets about Building 7 that I have deduced that I have never shared on my Blog before and I think this is a perfect place and opportunity to do so.

First of all, regarding the fires inside of Building 7, these were not caused by damage to Building 7 but were because evidence and property inside of key floors inside of Building 7 were being burnt to make sure all evidence was destroyed before the building was demolished, and the reason for this is because there was concern among the conspirators that some evidence in terms of paperwork would survive the collapse and be found by people not involved in the conspiracy, so (((they))) wanted to ensure that all such paperwork related evidence was burnt up by fire and reduced to ashes before the building was collapsed.  This is a key bit of information to understanding why there were fires on certain key floors in this building just prior to the collapse.

Second of all, it is my very strong opinion that Building 7 was originally planned to be collapsed earlier than it actually was.  As I have said, 9-11 was a pre planned scripted event where everything that \”happened\” on that day was planned in advance and was known in advance.  Those reporters who reported that Building 7 had collapsed earlier than it actually did were simply reporting what they had told to report, which was according to the original script.  At some point that script got changed due to unplanned circumstances that occurred that day, and those reports were not made aware of the change of plans/change of script.  This is the reason that at least two different reporters (from overseas) erroneously reported that Building 7 had collapsed when it was still very much standing.

Third, it is my opinion that something was supposed to happen on 9-11 that would explain the sudden collapse of Building 7 but that for some reason this did not happen.  Something did not go according to the plans of the conspirators and in response (((they))) had to change their plans regarding Building 7 collapsing.  It is possible that the original plans for 9-11 called for another plane to hit Building 7 but for some reason this did not take place.  It is possible that the \”plane\” that allegedly crashed into the empty field in Pennsylvania was intended to crash into Building 7.  Or its possible that the entire reason for the delay in the collapse of Building 7 is the last minute concern by the conspirators that paperwork evidence contained inside of Building 7 would survive the collapse and be found and so the decision was made to thoroughly burn all of this paperwork evidence so none of it could be found.

Now, to go deeper down the rabbit hole with actual evidence, below is a diagram listing all of the tenants of WTC 7 and the floors of the building that each tenet was on.  I invite you to look at this very carefully to understand why fires were observed on certain key floors of Building 7 and not other floors.  Those floors where the most fires were observed relate directly to the tenets who were on the floors and this relates to the purposeful burning of evidence on those key floors before the building was intentionally brought down.

Click on the below image to view it in higher resolution: 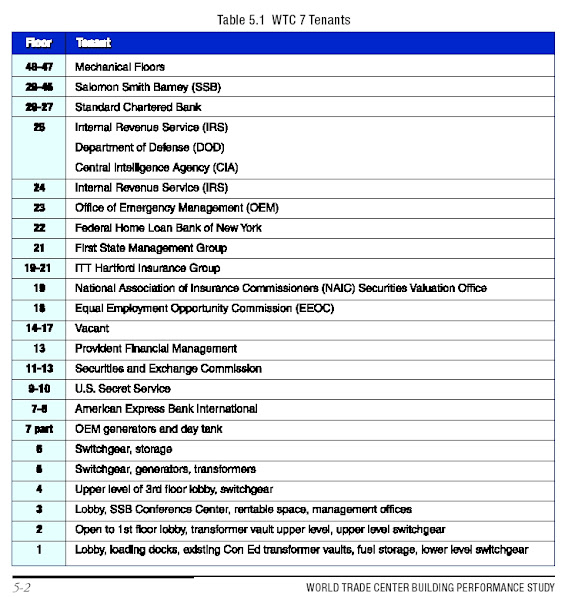