There is a great misconception (encouraged by Jews) that the Jewish problem is a relatively new problem associated only with such Jews as the Rothchilds, etc.  But the Jewish problem is a very old one that has existed far back in antiquity.  It is a problem inherent with the Jewish race from old because the Jewish race has always been about Jewish Supremism and Jewish control and undermining and going to war against non Jews.  The Jewish problem then is the same as the Jewish problem now.  Jews are not like people of other races who just want to live their lives in peace with their brothers and to not try to control others.  Jews have a hive mind where they all help each other and they are all following a plan to control the world.  What Cicero said about the Jews of that time is the exact same thing which can be said about the Jews today.  This is the inherent character of the Jewish race and it does not change from generation to generation.  It is an evil seed that seeks to make everyone else slaves to Jews.  This is the Jewish problem and its as old as the Jewish race itself.  As long as Jews exist, they will be this and it is the solemn responsibility of non Jews to know this and to spread the word about Jews to others who are not aware of what this evil race is really about. 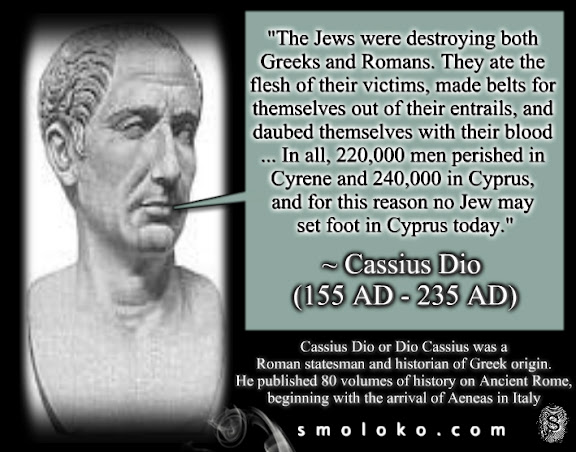 Jews were actively destroying both Greek and Roman society back in antiquity just as they have done all throughout history.  This is the Jewish character, to go to war against non Jews.  To undermine and destroy and totally fuck over non Jewish society.  This is what Jews do now and this is what Jews have always done because this is who they are.  At heart, Jews are a bloody, savage warlike race who want the world for themselves and want to destroy or enslave everyone else.  This is what  Jews did in Russia after they got control of that country following the 1917 Bolshevik Revolution.  Russia ran red with the blood of non Jews and Jews were the executioners.  And the remaining non Jews were slaves to Jews living in complete terror or their lives.  This is what Jews would like to do to the entire world.  Jews have been forcibly expelled from many countries and regions because of horrible Jewish behavior toward non Jews.  But Jews are working very hard to memory hole all of that so nobody knows about it today and to paint themselves as victims of racial and religious persecution for no good reason at all.  This is the Jewish lie, one of many Jewish lies.  Jews are the people of the Lie. 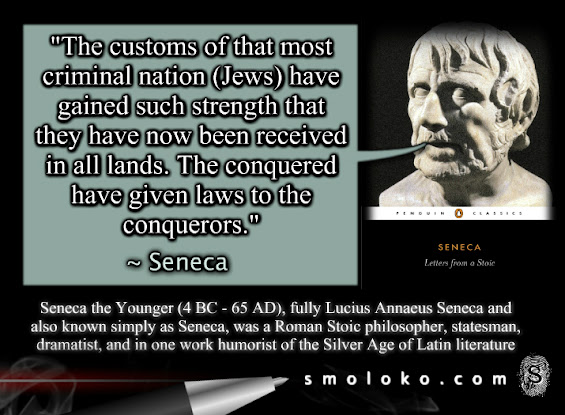 Tacitus was a senator and a historian of the Roman Empire during the 1st Century AD.  In the Works of Tacitus, Volume 4, published in 1752, Thomas Gordon wrote:
Concerning the jews, he followed the tradition and accounts current amongst the Romans. He tells you what different relations there were, and neither adds any thing, nor misrepresents things maliciously. It was an obscure State; generally enslaved by some greater power; to the Assyrians, Egyptians, Grecians and then to the Romans, and condemned by all, as much as they themselves hated all. They had not common mercy or charity toward the Gentiles and uncircumcised; and being persuaded that the Almighty loved only themselves, they fancied that he abhorred, and therefore they abhorred, the whole human race besides : So that it was said by Tacitus too truly, “adversus omnes alios hostile odium.”  The Jews were condemned by all in antiquity because everyone knew what the Jewish race was about.  The Jews hate all who are not Jews, then as now.  Jews believe that God only loves Jews and that God hates non Jews and has ordered Jews to kill and enslave non Jews.  The Christian Bible, especially the old Testament is entirely Jewish.  The way Jews think and feel has not changed over the centuries.  Its only been hidden so the common Goy is completely ignorant of it.  The Latin words translated to English are \”The Hatred of the Enemy, against all the others\”, meaning that Jews see all non Jews as the enemy they hate and are seeking to destroy.  This is true of the Jewish race today as it was in antiquity.  Jews are a race of haters.  And yet Jews have the gall to accuse anyone who sees the Jewish race clearly of being haters.  There has never been greater hypocrisy than Jewish hypocrisy.  My answer to the Jewish accusation is: Yes, we hate you evil haters as we should and we always will. You seek to destroy us so we seek to destroy YOU.  All your evil doing is going to come back and destroy YOU.  Its the Law of Karma applied to the evil Jewish race.  The real God condemns the Jewish race for what it is: Evil.

2 thoughts on “The Romans were Red Pilled about the Jews”