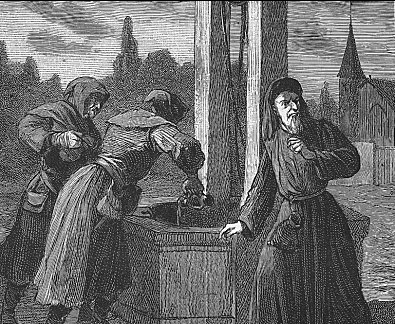 This Blog has gotten some recent comments by what I believe are Jewish disinformation trolls with the intent of derailing the content of this Blog.  It is notable that these comments have all been on a single post of mine, which is exposing the Jewish Master Plan as I interpret it.  Everything on this Blog is my own interpretation but I think its telling that comments which I believe are from Jews end up on that post above all others, because this is the truth about Jews and they know it.  But if you go to that post and look at the comments what you will find are long voluminous diatribes that do not discuss anything contained in that post but instead talk only about something which I have never said.  But the commenter did expose himself IMO when he added to his comment about how Jews were falsely accused of poisoning wells in the middle ages.  Why the commenter would work that into his text I have no idea.  I have never said anything yet on this Blog about Jews poisoning wells in the middle ages but since this commenter raised the topic, I want to address my opinion about this load and clear, so there is no ambiguity in my position concerning it.

Jews are perpetual liars to non Jews.  Jews will tell any lie to non Jews in order to gain an advantage for Jews.  The word of a Jew to a non Jew is worth less than nothing, because by their own words in the Talmud and other Jewish sources, Jews are encouraged to lie to non Jews and they are bound by no code of honor (Jews have no honor except to themselves) to be truthful with non Jews about anything.  So when Jews deny Jewish Ritual Sacrifice and call it Blood Libel instead, what the Jews say should be ignored.  Likewise, if the Jews deny that Jews poisoned the drinking water of non Jews in the middle ages, that too should be ignored.  A Jewish source can never be trusted to be accurate.  Only non Jewish sources can be trusted.

Now that I have said the above, what do I think about the concept of Jews in the middle ages poisoning the drinking water of non Jews?  I believe it because its perfectly in line with Jewish teachings in the Talmud and other Jewish Religious documents.  Although non Jews are not supposed to know what is in the Talmud, the Talmud is a document of extreme racial hatred toward non Jews and it encourages Jews to commit all manner of evil against non Jews including to kill them, to mistreat them, to exploit them, to commit usury against them, to lie to them, to cheat them, to enslave them, to conquer them, etc, etc. etc.  The Talmud can be viewed as an instruction manual for the Jewish race in how to treat non Jews and this document has been around for a LONG TIME.  It was certainly around in the middle ages.   For Jews to poison the drinking water of non Jews would be perfectly acceptable behavior according to the Talmud.  If I am going to believe the words of Jews at all, I am not going to believe the lying words of Jews when they talk to non Jews in order to deceive them.  I am going to believe the words of Jews when they talk to themselves in the Talmud and other Jewish Religious sources to themselves.  And if a non Jew says something against a Jew with the claim that the Jews have done harm to non Jews such as by poisoning their water then I am going to take the claim seriously and not just dismiss it as anti-Semitism as the Jews clearly want.

What is really being discussed here is not Jews poisoning wells but Jews purposely working to bring harm to non Jews in secret.  Jews always do their evil in secret because they are outnumbered by non Jews and if the non Jews knew what the Jews were really intent on doing to them then the Jews would be openly hunted down and killed like the outlaws they are.  So Jews work in secret to protect themselves.  So the Jewish goal to purposely bring harm to non Jews is what is being discussed here.  In the middle ages, poisoning well water of non Jewish communities was one method Jews used to carry out their Talmudic agenda.  In 2021 they have different methods of carrying out their Talmudic agendas.  Covid 19 and the injections (I do not call them vaccines) are IMO a way to purposely bring harm to non Jews, among other things.  All the non Jewish deaths that have been seen from either Covid 19 or the injection is IMO part of this Jewish agenda to purposely bring harm to non Jews.  IMO its just getting started and that Jews have a plan to use both \”Covid\” and the injections to turn the world of the Goyim upside down.  Forget about the Chinese.  The Chinese are scapegoats for the Jews who are behind all this.  You just have to wake up and see it.  Jews want to kill non Jews in secret and they are and they will continue to do so until they are stopped.