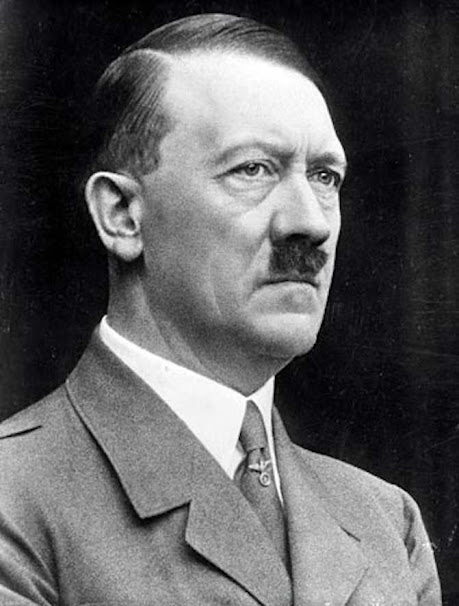 As I have said before on this Blog I have purposely said very little about Adolf Hitler because so much negative disinformation has been associated with this man that I have not been able to get a clear picture of who he was.  There is so much negative stigma associated with this man that I have not wanted to endorse him for that reason.  I still do not endorse him but in this post I want to tell you what I think about Adolf Hitler, for the record.

I believe that Adolf Hitler was a Patriot to Germany and to the German people who became very upset when he realized what the Jews had done to Germany during and after World War 1. He became aware of what the Jews had done to transform Germany from a proud nation to a people basically living in a Jewish toilet during the 1920\’s.  Hitler\’s outrage at what the once great nation of Germany had been reduced to is similar to my outrage about what the once great nation of America has been reduced to in 2021.  But unlike me, Hitler was very determined to do something to turn Germany around so the entire nation did not fall into open communism as it was clearly headed in the 1920\’s before Hitler and his fellow German Patriots and Nationalists intervened to change the situation.

Adolf Hitler was acutely aware of the Jewish problem especially as it pertained to Germany and he was very determined to remove Germany completely from Jewish control.  His method for doing that was not to kill all the Jews in Germany as the lying Jews claim but to completely remove Jews from all positions of authority and influence from which they could do harm to the nation.   The best thing that Hitler did was to remove Jews from all positions of authority, control and influence especially in the German Government and in the German main stream media.  Hitler properly recognized that the Jews had infiltrated and subverted and completely controlled the German government and media, which by the way is the exact same thing I recognize that the Jews control in America today.  By removing Jews from all positions of authority in the German government and media Hitler immediately took Germany out of the control of Jewish hands and put Germany back in the hands of German Nationalists and Patriots where it belonged.  And what did the Jews do in response to Hitler\’s removal of Jews from the government and media?  They declared war on Hitler and Germany in 1933! 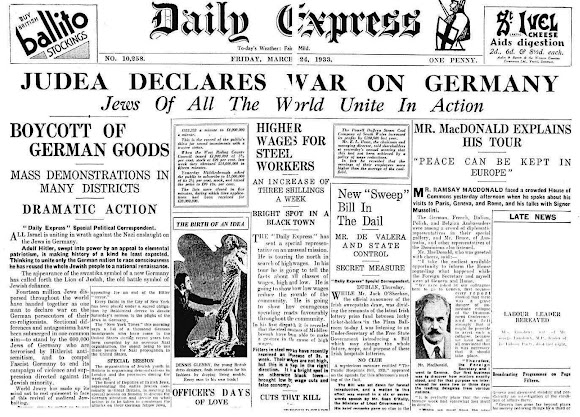 There are a lot of disinformation agents on the internet making the claim that Hitler was working for the Jews but this is clearly not the case.  Hitler was an enemy of the Jews and the Jews clearly showed that by declaring war on Germany.  Why did they declare war on Germany?  Simply because Germany was freeing itself of negative Jewish influence that was corrupting and pulling the entire nation down into the gutter.  Hitler had not harmed a single Jew when the Jews declared war on him.  All Hitler did was to free his nation from evil Jewish influence.

Jews wanted to destroy Hitler by any means.  Hitler did not want armed conflict with other western nations such as Britain and France but the British and French governments were controlled by Jews and Jews wanted armed conflict with Germany to destroy Hitler and to return Germany to Jewish control. Jews had their agents purposely kill a lot of German citizens living in Poland to get Hitler to annex part of Poland to protect the Germans living there but this was a trap to lure Hitler into a situation that would start armed conflict.  Jews used their agents in the British and French governments to then declare war on Germany over Poland and this is what started World War 2.  Hitler did not want war.  He wanted to protect the German people but the Jews who had already declared war on Germany as early as 1933 were very determined to do anything to destroy Hitler and Germany.
All during World War 2 and up to the present time, Jews have horribly defamed the image of Adolf Hitler to paint him as a mad dog intent on world conquest who needed to be killed but this is just the Jewish Snake defaming its clear enemy.  Jews have completely buried the truth about who Adolf Hitler really was and what he was trying to do under a huge mountain of disinformation to conceal from the general public the truth about Hitler.  This is what I believe about Hitler.
EDIT TO ADD:
I want to connect a dot here.  In the above post I said that Jews set a trap for Hitler by using their agents in Poland to kill a lot of German citizens there, which forced Hitler into the position of annexing part of Poland to protect the Germans living there.  Hitler\’s annexation of part of Poland was used as a pretext for starting armed conflict.  I see a direct parallel to that Jewish tactic used in Poland to instigate war with Germany to the situation in Ukraine with Russia.  What the Jewish Snake did in Poland in the 1930\’s is what it did in Ukraine.  First, a Jew controlled government got control of Ukraine, ousting the Nationalist Ukrainian government and replacing it with a Jewish puppet government that was and still is supported by the Jewish U.S. Government.  Once the government got control it began openly attacking Russians living in Ukraine using tanks and the full force of the Ukrainian military to genocide Russians living in Ukraine.  This was a Jewish provocation, setting a trap for Putin in Ukraine just as the Jews set a trap for Hitler in Poland.  Just as Hitler was forced to act to protect Germans living in Poland, Putin was forced to act to protect Russians living in Ukraine. Putin\’s response was to annex Crimea and to make it part of Russia just as Hitler did with a section of Poland in 1939.  Since the time that Putin annexed Crimea up to today, the Jew controlled western nations have been trying to start armed conflict with Putin over the annexation of Crimea.  Jews have sent ships to attempt to blow up the bridges connecting Crimea with the Russian homeland. Russia has had to be very diligent to defend Crimea. Just recently a UK ship tried to purposely violate the water near Crimea in the Black Sea and Russian ships had to fire warning shots to get it to back off.  I predict there will be other Jewish provocations made against Crimea.  While I do not have a clear picture of Putin, the fact that Jews are attempting to draw Russia into an armed conflict with the West is proof that Putin is not just a Bitch for the Jews as Donald Trump or Joe Biden or Barak Obama are   Putin is standing up for his nation and his people against the Jewish Master Plan IMO and the Jews are against him for that reason.  Putin is a Russian Nationalist first and this is why the Jews are against him.  A big part of the Jewish Master Plan is for there to be no nations and no separate governments.  Jews hate Nationalism because it is their intent to completely destroy it so they can create a one world government under Jewish control.  So Putin as a Russian Nationalist standing up for Russian interests instead of being just a Jewish Bitch like the American Presidents makes Putin an enemy for the Jews to deal with.  This is how I see Putin.  Putin clearly does not want armed conflict with the West and he is being very careful not to be drawn into conflict, for example over Syria, but I believe the Jew controlled Western nations are going to try to provoke an armed conflict with Russian because this serves Jewish interests.  Jews prefer war with many dead on both sides instead of a world living in peace where Jews do not have total control.  That is why Jews are trying to provoke a war with Russia.

4 thoughts on “What do I think about Adolf Hitler?”