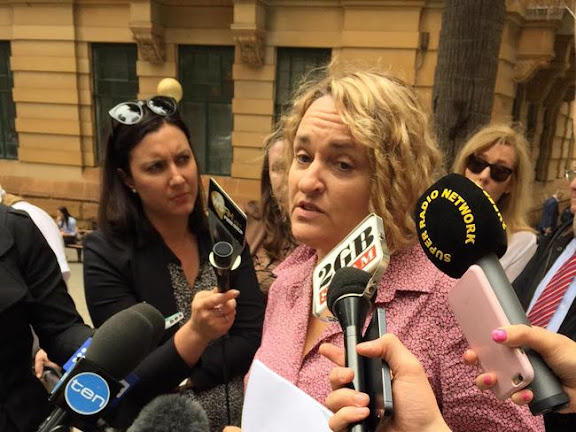 In my previous post I said that there are many disinformation agents wearing sheep\’s clothing who are in reality Trojan Horses (AKA PSYOPs) who are in the employ of the bad guys in order to deceive the common man with carefully crafted lies that are said to be the truth.  Certainly one very good example of this is Fiona Barnett, the alleged Australian whistle blower exposing that Satanists completely own the Australian government.  In the above picture you see Fiona Barnett surrounded by main stream media reporters who are helping to publicize her story and that right there is the ultimate proof that she is a disinformation agent for the Jews.  Had her story been truthful Fiona Barnett would be dead instead of going around everywhere surrounded by Jewish main stream media reporters who are getting her story out to the people.  She is an agent who is serving multiple Jewish agendas with her story.

As I exposed in a previous post, one of the agendas of Fiona Barnett was to smear ex President Richard Nixon as an evil child raping Satanist when in reality her smear attack against Nixon was because Nixon became a vocal outspoken critic of the Jewish control of the U.S. Government and America during his second term.  Fiona Barnett lied about Nixon raping her and she also lied about Watergate, making up some bullshit disinformation that it was because Nixon was trying to steal some pedophile secrets that the Democrats had about him.  That story is complete bullshit.  Fiona Barnett is telling outright lies to create a completely \”false truth\” in the minds of people who believe in her.  At one time I did believe this woman\’s story but now I totally disbelieve her.  I see her as a fraud and Jewish PSYOP from Day one.

But what this post is really about is to look at the other things Fiona Barnett said (and she is still saying them today) about various people.  We know that in the case of Richard Nixon she attacked and defamed him with a vicious lie that Nixon brutally raped her in the back of a plane when she was five years old.  Who else besides Nixon has Fiona Barnett attacked and smeared and what other reasons could there be behind her attacks?

Another person who she has viciously attacked is Dr. Antony Kidman, who is the father of Australian actress Nicole Kidman. 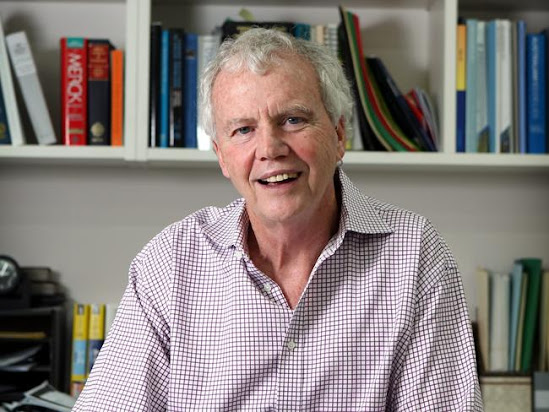 As in the case of Richard Nixon, Fiona Barnett viciously smeared the reputation of Dr. Antony Kidman, painting him as a child raping Satanist who performed all kinds of vicious mind control experiments on her and raping her repeatedly before she miraculously \”recovered her memories\”. Outside of Fiona Barnett\’s wild stories about him, I do not know who Dr. Kidman really was or what he was involved in in real life behind the scenes but I strongly doubt he was the person that Fiona Barnett is painting him to be with her story.  Her vicious attack and smear on this man is explained by something else which I do not currently know what that is but for the first time I perceive this truth about him.  He did or said something to anger the Jews to cause this smear campaign to be leveled against him and apparently he was murdered but not for the reason Fiona Barnett gave for his murder.  In addition to Dr. Antony Kidman, Fiona has told lies about his daughter, Nicole Kidman, painting her as an evil Satanist too who was fully aware of what her father was doing to Fiona. I have seen statements by Nicole Kidman that indicate she is not what Fiona Barnett paints her to be.  I do not trust anything Fiona Barnett has said about either Dr. Antony Kidman or about his daughter.  Her entire story falls apart under scrutiny and her true motives for smearing certain people become clear when one realizes that she is a asset who is working for the Jews in order to deceive the Goyim.  Nobody should trust a single word she has said to be truthful no matter how much they may want to believe its true.  All of her information is given to her by others and she just a mouthpiece for a carefully crafted Jewish disinformation campaign.

Below is a link to a web site that is dedicated to exposing the lies told by Fiona Barnett.  It probably does not mention Fiona being a Jewish asset but that is not really important.  What is important is exposing that the story this woman has told (and is still telling today) is a lie and that she is a fraud.  This woman has deceived many people with her story, including myself, so it is very important to take off her mask in front of the entire world and show that she is a fraud so that good honest people are not misled by this agent.  Remember, she is not doing this for herself but as an agent of others who put her up to it.  She is a perfect example of a Jewish PSYOP.

Connecting some dots for the intelligent and insightful among us, notice the similarity between Fiona Barnett and her story and another Jewish PSYOP, QAnon.  In fact, the very same people could be (and in fact I say they are) writing the script behind what these Pied pipers say to make them appear to be giving basically the same message.  Fiona connects with another Jewish PSYOP named Isaac Kappy.  Once you start connecting these dots, all kinds of people get exposed in the web of Jewish lies that are being told.  YOU are the one who must have your eyes wide open and realize what is going on here.  I hope you are awake.  I am certainly trying to wake you.

Another way of looking at a Jewish PSYOP is as a Mossad operation.  Many of these people are actually Mossad agents working in Mossad intelligence projects in the Real World, regardless of what they appear to be in the False World.  Can you tell the difference?  In the Jewish world, the Mossad is the group running the Jewish deception game on the entire world. 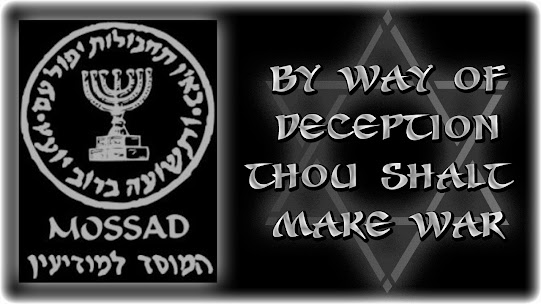 There is a misconception that the Mossad is the intelligence agency just of the tiny country of Israel.  That is the False World explanation of the Mossad.  The Real World explanation of the Mossad is that it is the intelligence agency in charge of Jewish deception world wide for Jewish control of the world. Its not the Israeli Mossad but the Jewish Mossad. In the Real World, the CIA is actually subordinate to and a subdivision of the Jewish Mossad.

Still not convinced that Fiona Barnett is a fraud and a Jewish Mossad operation?  See the following link:

So what do YOU think about Fiona Barnett?  Do you see her as truthful or a disinformation agent for the Jews?  Leave any comments below.