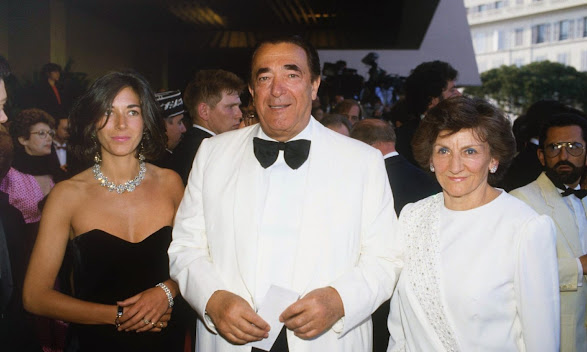 Robert Maxwell, shown in the above image with his daughter Ghislaine Maxwell and his wife Betty Maxwell was a very wealthy Jew owner of a UK media conglomerate including the Daily Sun and he was also a Mossad intelligence agent.  He allegedly died in 1991 on one of his yacht\’s but I very strongly suspect his death was faked to remove him from the public spotlight.  Look at the similarities between Robert Maxwell and Jeffrey Epstein.  Both were very wealthy Jews with many connections.  Both were involved with intelligence agencies such as the Mossad and the CIA and MI6. Both achieved a level of notoriety due to their activities.  Both allegedly died under mysterious  circumstances.  I contend that both of these men were high level intelligence assets who had their deaths faked for them by intelligence agencies (CIA, MI6, Mossad) to remove these agents from the public eye by making them appear to die but in reality these men did not die as alleged.  Jeffrey Epstein is still alive in the Real World.  Robert Maxwell may still be alive in the Real World.  You must always distinguish between the False World and the Real World.  On this Blog we care nothing about the False World except to expose its lies to the public.  We only care about the Real World which is the truth.

The claim is made that both Jeffrey Epstein and Ghislaine Maxwell were Mossad agents who were involved in Mossad intelligence projects to entrap high level U.S. politicians in order to Blackmail them.  I find this highly believable.  Although I have not included Blackmail in my post about the Jewish Master Plan to control the world, it certainly belongs there as one of the major methods that Jews use to control the entire world.  By setting up politicians in compromising positions and photographing and video taping it, this becomes instant Blackmail material that can be used to control that politician from then on.  If the politician does not \”play ball with the Jews\”, the Jews can very easily release the blackmail material on the world media (which Jews control) and immediately destroy that politician\’s career.  Its a no brainer how blackmail can be used by the Jews to control politicians and even entire governments.  And this would also be a reason why Israel receives such a huge amount of U.S. tax payer money every year because U.S. Politicians are influenced to keep huge money payouts to Israel coming on a regular basis just like they are being blackmailed to keep their secrets silent.  This is exactly what I say is happening in reality to explain why Israel gets so much money every year that nobody in Israel has to work for a living.  The USA provides more than enough money so no Israeli has to work and they can spend all their time killing Palestinian children in Gaza instead.