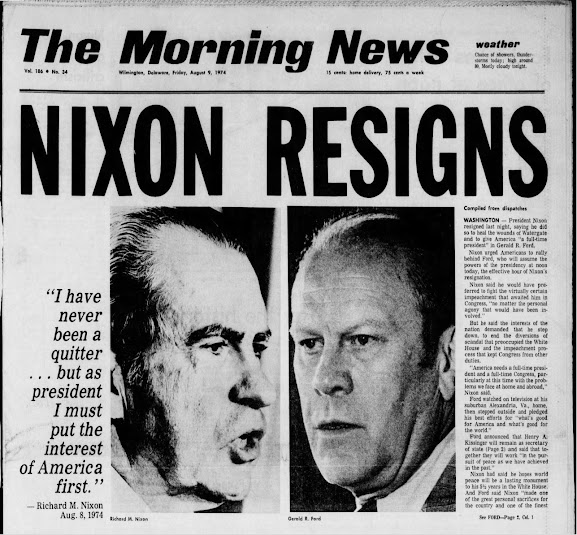 Like the previous post, this post is the result of a lot of dot connecting by me to understand the False World vs the Real World as discussed in the Two Worlds Paradigm.

It wasn\’t the dishonesty or crookedness of Richard Nixon that caused him to be removed as President but his vocal opposition to Jews and Jewish control of the U.S. Government and the USA. I am in no ways trying to say that Richard Nixon was a Saint.  Far from it.  Nixon was a Freemason and an Illuminati member but he wasn\’t a Bitch who was going to just kneel down in submission to the Jews. Despite his corruption, he did have a measure of integrity about him that caused him to resent and object to Jewish control of the USA.  He was resentful and vocal in his opposition to Jewish control of the USA and this came to the awareness of high level Jews who then destroyed Nixon politically to completely discredit him and to smear his name with the American public. I really believe that to be this to be the real reason for Watergate and his forced resignation to avoid being impeached in 1974.

So for a Freemason and Illuminati member in a position of high political power as Richard Nixon was to be making statements against Jews could not be tolerated and Nixon had to be removed from power and publicly discredited, but the real reason for his removal had to be hidden from the public so the Watergate story was invented to destroy Nixon and Nixon himself was set up to fall into a carefully laid Jewish trap by those around him in his Presidency that he trusted.

And this brings me back around to a discussion of Fiona Barnett being a very clever disinformation agent as I described in my previous post.  One of the many claims made by Fiona Barnett is that she was raped by Richard Nixon in the back of a plane that flew to Australia in 1974.  I was always astounded by that claim and I sought to either prove or disprove it.  I noticed that the date Fiona gave for her Nixon rape was after Nixon\’s resignation from the Presidency in 1974. I was in direct contact with Fiona Barnett earlier and I asked her about that and she confirmed that Nixon came to Australia in 1974 after his resignation.  But that seemed too strange.  Why would Richard Nixon come to Australia in secret just to rape Fiona and nobody at all in Australia reported Nixon as being there. That did not seem right at all. This is before I knew that secret tapes had been made of Richard Nixon and Billy Graham both saying negative things about Jews in private White House meetings. It is 100% confirmed that both Richard Nixon and Billy Graham made private statements against Jews and this was only recently revealed.  So I got to really thinking about that, as follows:

Those secretly recorded tapes showing Nixon\’s anger and resentment at Jewish control of the U.S. Government tells us who Nixon really was behind closed doors.

I actually confronted Fiona Barnett on Facebook Messenger about Nixon\’s vocal statements against  Jews and how that I cannot see someone like that as being an evil child raping Satanist.  Shortly after that Fiona Barnett broke off all conversation with me and she also shut down her Facebook and disappeared from public view for a long time.  That is the act of a disinformation agent who cannot defend her lies against the truth so she just disappeared.  She is back now telling the same old lies but she is still a disinformation agent who is working for the Jews in secret. Just like Alex Jones, nothing she says can be trusted as being real and legitimate.  Everything she says has a hidden agenda and someone else is writing her disinformation scripts for her.

But going beyond Fiona Barnett, there are others on the internet who paint both Richard Nixon and Billy Graham as being evil Satanist pedophile child rapists and I smell a big Jewish rat in that. All those who paint Richard Nixon and Billy Graham as evil child raping Satanists are doing so ONLY to discredit these men because of their vocal opposition against Jews and Jewish control of America.  I have no doubt about that now.  You have to realize and understand that there is a disinformation smear campaign against these men simply because they came out against the Jews.

We must always question the motives of those who make these accusations and at least consider the possibility that those making them are part of a Jewish disinformation campaign to smear and discredit people who the Jews want to destroy the reputation of for some reason.  We must be wary of being deceived at all times.

2 thoughts on “The Real Reason behind Watergate”