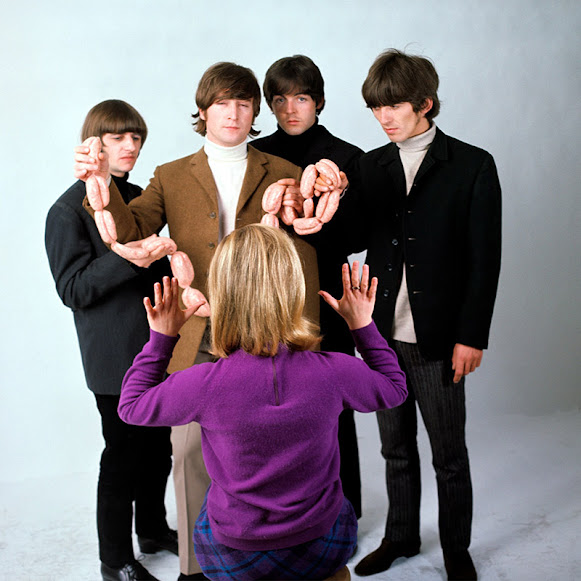 I had always wondered why the Butcher album cover was made which was so unlike anything the Beatles ever did before and afterwards.  I was never satisfied with the stories released about it and I was always searching for a deeper explanation.  In the previous post I showed a lot of photographs from the Butcher photo session in March 1966 and I stated that there is a lot of symbolism in those images and a lot of sadness and concern on the faces of the Beatles during that session.  I could not comprehend why the Beatles would look so sad and have such a look of what I can only describe as fatality on their faces.   And then I realized something very important that I had completely overlooked, which is that John Lennon made his statement about the Beatles being bigger than Jesus when?  Wait for it.  He made that statement in March 1966.  Suddenly the truth was revealed to my eyes like an epiphany to explain not only the Butcher album but also the way that John Lennon looks the way he looks in it and the negative symbolism concerning him in it.  If you don\’t see it, allow me to explain.

In the False World we were told that John\’s statement was no big deal in the UK where he made it and it was only a big deal when that information got released in the USA in August of 1966 but that is not the case.  Its very obvious that is not the case and that John\’s statement had an immediate backlash in the UK against not only John Lennon but the entire group.  As I intend to show, the Beatles were a manufactured group and were never who they pretended to be.  When John Lennon made this statement, he fucked up and said something that angered those who were behind the Beatles and there was an immediate backlash against the group and especially against John Lennon.  I contend that the Beatles were forced to create the Butcher album to immediately defame them in the eyes of the public.  And as for John Lennon, I believe he brought a death sentence against himself because of his statement.  As I said in the previous post, I see clearly symbolism focused on John Lennon that indicates possible evisceration. See the image at the top of this post. All that doom and gloom during the Butcher photo session is evidence that all four of the Beatles knew that they were all being punished for what John said but that it was the man known as John Lennon who was about the pay the ultimate price of his life for what he said that angered some very high profile people.  Who became so angered by his statements I can only guess but since Jews run the world its very likely that it was important Jews who became so angry.  Why would they become so angry?  Perhaps because they perceived that John Lennon\’s statement would create a huge back lash and drive people back into Christianity instead of drifting away from Christianity as the Jews want.  And that is exactly what happened in the USA in August of 1966 with a huge Christian backlash against the Beatles.  I contend that there was a similar back lash in the UK which has been carefully hidden. But if you are aware of the Jewish Master Plan that I have been discussing, then John\’s statement caused something to happen which actually set back and derailed the Jewish Master Plan for the entire world and it is this that got John Lennon and the Beatles into such hot water.

I contend that the Beatles were part of the Jewish Master Plan from the start and that they and the entire sixties rock scene was intended to change the world in a certain way that Jews wanted but John\’s statement totally fucked up their plans.  This is what caused such anger toward the Beatles, because suddenly one of their agents/minions (who John Lennon actually was) had done something to actually ruin their plans.  Can you comprehend what I am saying?

Here is the sequence of events:

John made that statement in March of 1966 and it got publicized in the UK.

There was a back lash in the UK against his statement.

Someone important heard of it and was greatly angered at seeing it.

The Beatles were forced to do the Butcher photo session to defame them.

The group was totally changed not long after, with John Lennon especially targeted for immediate removal from the group to punish him for his statement.

Since the Beatles were a manufactured group, immediate calls were made to destroy this group.  Suddenly a group that had always had a very positive image in the UK was in dire straights.  This was the end of the Beatles as they had been up to now.  If you look at the expressions of the four men in many of the images of the Butcher photo session you can clearly see that they all know that the writing is on the wall.  John Lennon especially knows.  I believe that the John Lennon in the Butcher photo session was killed and replaced later in 1966.  I also believe that Paul McCartney was killed and replaced in 1966.  I believe that Brian Epstein was also killed and replaced in 1966.  At least those three, but its possible the entire group was killed in Jewish retaliation.

So to answer the question, what happened to the Beatles in 1966?  One of them said something he should not have said in March of that year and this immediately changed the entire group from that point onward.  John\’s statement led to the deaths of him, Paul and Brian in the Real World.  I will be discussing more about the Beatles after March of 1966 to give evidence that what happened later to them is a direct result of this Jewish/Illuminati desire to destroy the band.  I say they did completely destroy it by the end of 1966 and that a completely different version of the Beatles reappeared in 1967 that had nothing to do with the former group except to use the same name.

Now all the obvious disinformation about the Beatles in 1966 comes into crystal clarity, such as about Paul McCartney dying in a car accident and all the other \”conspiracy theories\” that have appeared on the internet about that time period.  All of that disinformation is a cover to disguise the truth about what really happened to the Beatles after March 1966, and to hide the Jewish vendetta against them all because of the controversy that John\’s statement caused.

The Illuminati speaks in symbolism

Speaking of symbolism, I believe the image at the top of this post is loaded with it. That photo is sending a clear message from the Illuminati to those who have the eyes to see it. Here is what I see.  John Lennon is the one who has really fucked up and the woman is focused on him but also Paul McCartney is included with John Lennon between the woman\’s hands. So it is both John Lennon and Paul McCartney who are going to be replaced. Even though John is the one responsible, it is both of them who are going to pay the penalty.  Ringo Starr and George Harrison are just watching uncomfortably from the sides indicating they are not being replaced but they are forced to go along with what has been decided from above. John is going to be eviscerated because he has earned a special punishment from the Illuminati for his great sin. Paul is going to be killed because he is closely associated with John. They will both be replaced by look a likes. That is the symbolism I see. Can you see it too?

I perceive that this photo session is the last one in which this version of John Lennon was seen by the public and that all John Lennon appearances after March 1966 were using look a likes.