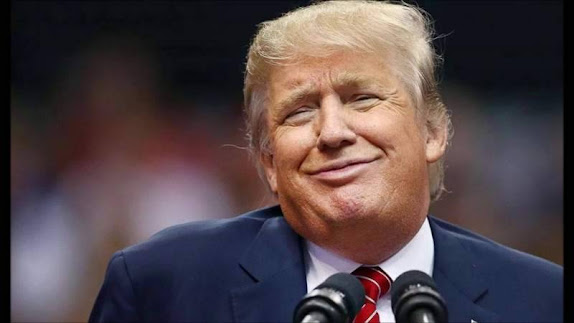 In my previous post I said that Jews use certain people as PSYOPs in the False World as part of achieving Jewish agendas. These people are nothing more than actors on a Jewish stage to deceive the Goyim.  Perhaps the biggest and best example I can give of a Jewish PSYOP is Donald J. Trump.  It has taken me a long time to reach the point of my awareness of the Jewish Problem to be able to state that Trump as a Politician is a Jewish PSYOP from 2016 all the way up to now.  From 2016 before he became President, all during his Presidency and after his Presidency, Trump is controlled opposition.  If you don\’t understand what controlled opposition means, it means that there are two or more sides who appear to be conflict with each other, but the conflict is nothing but a drama put on to manipulate, control and deceive the public.  Behind the scenes in the Real World, Jews control all sides in secret, and they play the sides against each other in a puppet show to manipulate the public.  Here are some examples of controlled opposition, where Jews control both sides of the argument.

MSNBC and CNN vs Donald Trump

The Republican Party vs the Democratic Party

Blue pilled people in the false world are totally fooled by the drama and are clueless about the controlled opposition game being played on them by the Jews.  But I want to get back to Trump.

Trump is not what he appears to be to the public in the False World.  He is not genuine.  He has never been genuine.  A former reality TV star, he never stopped being a reality TV star all during his Presidency.  Trump knew from Day one that he was a phony but with such pied pipers as QAnon painting him up to be great Patriot and hero on the internet, many people were deceived by this man and believed him to be honest and sincere, including myself.  I had to find out the hard way who Trump really was by watching what he did during his Presidency. He was a Jewish puppet from Day one but he disguised that fact from his supporters.

Now I want to address the constant attacks on Trump by the main stream media, particularly CNN, since before he became President.  These attacks persisted all during his Presidency and they have not let up at all since he left the Presidency.  If you turn on CNN or MSNBC today you will see a constant stream of attacks on Trump with calls to prosecute him, etc.  Its the same old story from 2016 with a new face.  Attack Trump.  Attack Trump.  Attack Trump. But you must understand that CNN and Trump are working for the same people.  They are controlled opposition putting on a drama for the public.  If you will notice, Trump has never defended himself from the media attacks.  He allows himself to be attacked and demonized and does not respond to it.  Do you know why?  Because he is part of the drama.  He lets himself be attacked and smeared because that is his role in the controlled opposition drama that the Jews are putting on for the American public.

Its also a way to make the conservative white race rally around and support Trump against Biden, as if reelecting Donald Trump in 2024 is the very best that the conservative white race can hope to attain politically in America.  But Trump is not a Patriot who represents the white race.  He is a Jew who represents the Jewish race.  He proved that in spades all during his Presidency.  So if he were to be reelected, God Forbid, he would be the same train wreck he was from 2017-2020.  But I am digressing from what I am really trying to say.  Jews have given the illusion to the white race and conservatives that reelecting Donald Trump is the very best they can hope for to stop the Democrats.  If Donald Trump does manage to get elected in 2024, Jews win. If Kamille Harris gets elected in 2024, Jews win.  Jews have the whole game rigged so that there is no political solution left to the American people to get an honest leader who is not corrupt and controlled.  The only solution left to the American people is a non political one in the form of a Revolution, but good luck with getting that to happen.

12 thoughts on “Trump as a Jewish PSYOP”