Throughout History Jews have made comments that reveal their true intentions toward non Jews and about plans for Jewish World Dominion.  In this post I want to show some of those quotes.  And just to prove that these quotes are real and not disinformation by people \”who just hate Jews and love to spread lies about them\”, I am going to give a source of the quote from a Jewish or other source that is not anti-Semitic.  A lot of people have been conditioned to believe that anything bad said about Jews is just anti-Semitic disinformation, so I am going to add these references to show that these are actual quotes and not made up lies just to frame the \”innocent\” Jews.  Let us begin.

My comment:  Jews see their race as the master race of planet earth and see non Jews as inferior. Jews are the most racist race that there is, putting their own race above all others. If non Jews refuse to accept Jewish superiority then it is the prerogative of the Jewish race to go to war against those non Jews.  This explains the Jewish war against the White Race (especially in Europe), for example. 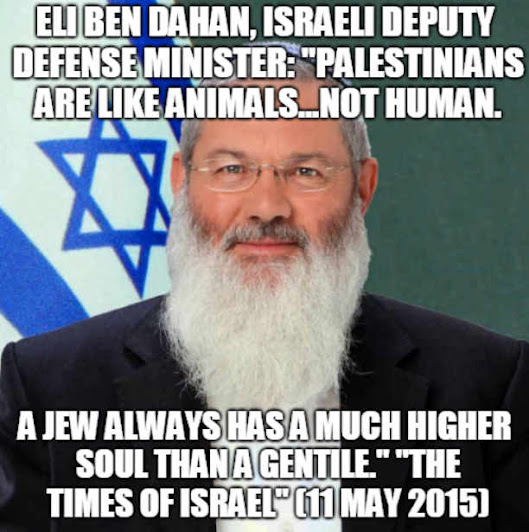 My comment:  That Jews like Eli Ben Dahan view the Palestinian people as animals justifies treating them like animals including ruthlessly killing them at will, but it is not just Palestinians that the Jews view as animals but all non Jews.  As the Talmud clearly says, only Jews are human.  All non Jews are no better than animals.  Could anything be more vile and racist than that?  According to this Jew, all Jews have a higher soul than that of a Gentile and this reflects the teaching of the Jewish Talmud, which is by far the most racist \”religion\” that has ever existed. 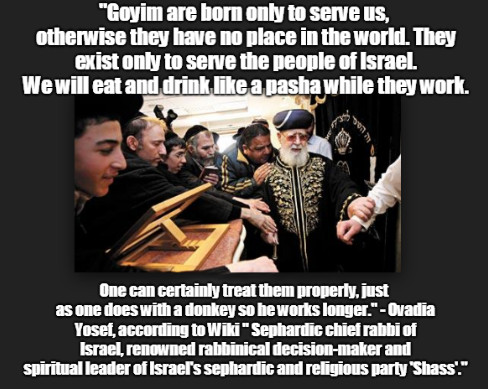 My comment:  This comes straight from the Jewish Talmud, which says that Goyim are born to serve Jews.  In other words, the Talmud says that Jews own the earth and non Jews are their slaves.  This is the real stance of the Jews and is the foundation of the Jewish Master Plan to control the entire earth.  Ironically, if one reads the Christian Bible it says the same thing.  Jews are destined to rule the world and the Nations (ie the Gentiles) shall serve Israel.  Strange how Christians are completely blind to that fact.  As for Jews of Israel eating and drinking like a pasha while Gentiles work, that is not an idle boast either.  Billions and billions of hard working American\’s tax dollars are sent to Israel every single year so Jews can eat and drink like a pasha without having to work while Americans work to support them.  Are you happy with that?  Since they don\’t have to work, they have all the time in the world to kill Palestinian children in Gaza.

My comment:  Jews are the destroyers of non Jews.  Nothing that non Jews can do will ever satisfy the Jews.  Jews will forever destroy non Jews because they want a world of their own.  When Samuel says we want a world of our own he is not talking about Israel.  He is talking about planet earth.  Jews want to control the entire world and they are engaged in a massive conspiracy to make this a reality.  I say to you that it is already a reality, although most non Jews are completely unaware of it.  When Jews own the governments and the media and all the major institutions and the banks and the money and the economy and basically everything else you can think of, then they do control the world except for some holdouts such as in Syria.  They own the world in secret and a day is coming when they plan to remove the secrecy so that everyone knows that Israel is the capital of the entire earth.  That is the Jewish Master Plan.

One thought on “Revealing Quotes by Jews”