The CIA was behind the RFK assassination 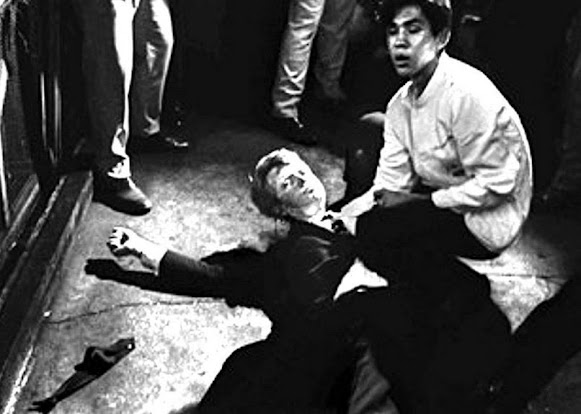 I don\’t know how much good it does me to make a post like this here but it came to me very strongly that the CIA was behind the assassination of RFK in 1968 at the Ambassador Hotel in Los Angeles, CA.  The reason behind the assassination is that an RFK Presidency in 1969 would be a direct threat to the existence of the CIA just as a JFK Presidency in 1964 would have been a direct threat to the existence of the CIA.  The CIA is very good about protecting itself and very lethal too considering all the tools of assassination that it has access to.  One would never think that the CIA would be involved in the assassination of American Presidents and other Politicians but they are and have been since at least the early 1960\’s if not before.  This involves the Two Worlds Paradigm as everything does.  In the False World, the CIA is just an intelligence gathering agency that would never be involved in domestic assassinations but in the Real World the CIA is a monster that is involved in every evil thing under the sun including assassinations, mind control, child sex trafficking, distribution of drugs, etc. etc. etc.  The CIA is a Pandora\’s Box of evil in the Real World but I am digressing from the purpose of this post which is about RFK.

What the CIA did in the case of RFK was to abuse its mind control technology on an unwilling subject named Sirhan Sirhan to get him to assassinate RFK and then to forget all about it.  I showed you in at least one previous post that the CIA developed mind control technology very early to control a person to make them do things they would never do.  A person can be programmed to murder and it has been done many times.  Today this technology has been advanced to a very sophisticated level but even in 1968 and earlier it was capable of programming Sirhan Sirhan to kill RFK.  How many other murders are due to CIA mind control?  But the reason that the CIA could not allow RFK to be President is because RFK would expose the CIA role in the murder of JFK and so the CIA had to eliminate RFK to protect itself.  Nixon was dirty and in bed with the CIA (For example, the Apollo Moon Landing Hoax, among other corruptions) and he would never expose them so there was no danger to the CIA for Nixon to become President.

Something else I wanted to point out is that the CIA is completely immoral.  It used Sirhan Sirhan to assassinate its political enemy and then allowed Sirhan Sirhan to take all the blame and rot in prison for life. That shows the true moral character of the CIA.  The CIA is immoral and ruthless and it will stop at nothing to achieve its agendas. It would be far better for the United States of America if the CIA had never existed because the CIA has perverted America beyond all recognition. If you look at the cesspool America is today in 2021, a good part of the blame for that rests on the doorstep of the CIA.  If I had my way, the CIA would cease to exist forever more because it is evil.  And the CIA is in bed with the Jews and the Mossad and helps the Jews accomplish their agendas.  The Real World is a cesspool of corruption with all the evil players connected and helping each other.  Also in the Real World there are no good guys in positions of power.  All the world leaders are corrupt and in bed with corruption to varying degrees or else they would not be allowed to become world leaders.  In the Real World Democracy is an illusion and corruption is king. I wish it were not so.  I wish we lived in a different world where good and right prevailed but that is not this world. Evil men have bonded together and turned what could have been a good world into an evil one.  That is what the Real World is.

The CIA like the United States Government is dirty and corrupt as fuck. If you were paying attention to 9-11, you should know that the USA is totally corrupt.  Its not even a country except in the False World. Its a toilet for Jews to shit in.  See this as an example of some evil Jewish shit. If you are still waving the American flag you are a fool to be doing it. I have lost all faith in America and that is a very healthy attitude have. Do not legitimize a cesspool by believing in it.

Just like the U.S. stock market is nothing but a confidence game, the U.S. Government is also a confidence game.  It only has value if you believe in it.  If you don\’t, its just a giant turd floating in a toilet bowl of Jewish filth and corruption.