The Mysterious Stacks of Bricks

One of the comments in my previous post called Pictures from the Real World is that the poster did not understand the image of a stack of bricks posted there.  Here it is reproduced below. 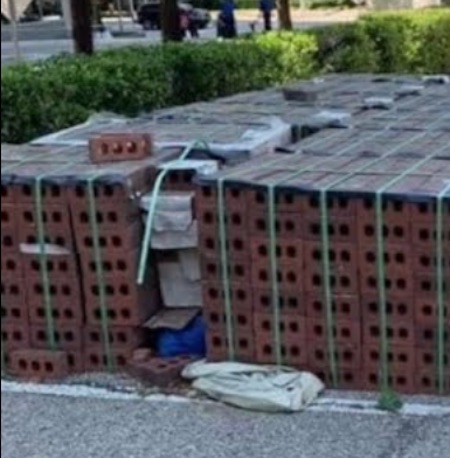 Although it was not my intention to explain these images, for the sake of clarity and so that people understand I will explain this one.  This is a stack of bricks that was seen in one of the American cities that were erupting in protest following the \”George Floyd murder\”, commonly known as the BLM protests last year.  These stacks of bricks were seen in many of the cities where people were rioting.  Nobody seems to know who put the bricks there and why they were put there but for whatever reason these bricks were there in the same vicinity where these angry protesters were rioting.  There is no legitimate false world explanation for why these bricks were placed there but there is a real world explanation, and it is this.  Whoever was behind the \”George Floyd murder\” and the following BLM anti-police protests wanted the rioters to pick up these bricks and throw them through glass windows, throw them at police and possibly even throw them at each other in a race riot.  Those who were behind these events wanted violence.  They wanted property damage.  They wanted for the mob to \”rise up\” in angry violent revolt against not just what happened to \”George Floyd\” but also for decades of alleged police abuses and racial inequality.  Although it appeared to be a spontaneous act by the mob in the false world, in the real world it was purposely incited.  It was planned and prepared for in advance and then was unleashed on an unsuspecting American public on a certain date.  In other words, it was a PSYOP.  Agent provocateurs possibly from the U.S. Government itself put the stacks of bricks there so people would throw them.  Most of the people did not throw the bricks but they saw them and they wondered why they were there.  This explains the bricks but it does not explain the whole incident of the George Floyd alleged murder and the BLM riots.  There is a deeper explanation behind that which really needs to be talked about to give context to the entire incident.