Congratulations to Texas Governor Abbot for doing the right thing…finally. 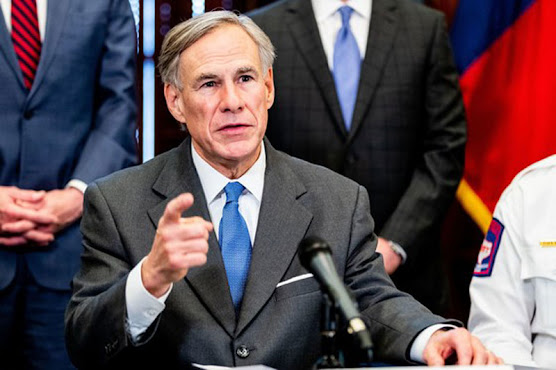 You won\’t often find me saying anything good about a U.S. Politician but in the case of Texas Governor Abbot I make an exception and the reason is because of this news which I just learned today. 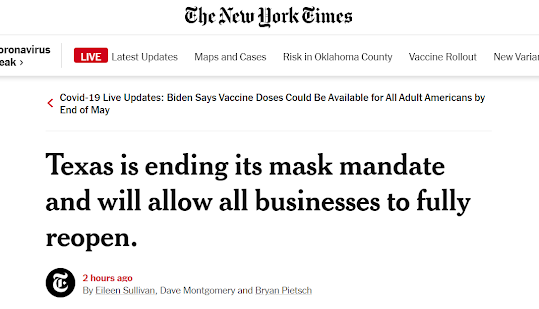 Texas is ending its mask mandate and will allow all businesses to fully reopen.

Gov. Greg Abbott of Texas said on Tuesday that he was ending his statewide mask mandate, effective March 10, and that all businesses in the state could then operate with no capacity limits. “It is now time to open Texas 100 percent,” he said.

I am actually very surprised to see this as I did not expect to see such a thing for a long time within the USA.  I suspect that this decision by Abbot has a lot to do with the recent ice storm in Texas and the very poor response of the state government to address it and the huge price gouging of customers by the Texas power authority.  I think that caused a huge amount of anger and disgust at Texas state officials and there was a concern that citizens of Texans were going to drive the current state leadership out of office.  So that is at least one reason that comes to my mind for this decision, which was to appease the growing anger of the citizens toward the government.  Better to loosen the authoritarian grip on the citizens than to risk that the citizens will rise up in open rebellion against the government.  Texas citizens were tired of the Bullshit and were not going to take anymore.  Texas state officials recognized this and this decision by Abbot is the response.  To me this explains why this is happening in Texas.  Whatever the motivation behind this decision, I applaud it and I certainly hope that Texas follows through on it.  After month and month of a never ending stream of bad news about the \”pandemic\”, this is certainly breath of fresh air that things might be returning to normal in Texas.

It is my prediction that those who are behind the plandemic are not going to be pleased with this decision.  Their goal is to get every person on the planet injected and Covid 19 is the justification for the injections.  If things go back to normal in Texas it will set a very bad precedent.  Other states follow the example of Texas and also go back to normal.  This seriously threatens the long term plans of the people behind the plandemic and you can be sure that there will be a response to it.  What I am already predicting loud and clear is that something will happen which will force Texas back into wearing masks and closing businesses, etc.  I am not trying to be doom and gloom in saying this but I am very aware of the way the people behind the plandemic operate.  They do not allow anything to get in the way of what they want.  If an obstacle appears to their plans then they find a way to remove that obstacle.

I have been watching these people for many years and this has allowed me to think like them well enough to predict how they might respond to this decision that clearly threatens their carefully planned global immunization scheme.  I want to make very clear that this is not what I want to happen by any means. My only desire is for the world to go back to the way it was before the plandemic showed its ugly face.  But I can already predict that a new variant of Covid 19 will suddenly appear that is deadlier than its predecessors that will force Texas to reverse its decision.  These people will develop this virus in labs (or they have already developed it as a contingency plan) and will release it and the MSM will report it.  Just watch to see if this happens.  I could be wrong but I have been watching these people long enough to predict this will be their response.  They are completely dishonest and will do anything to achieve their goals. Human life means nothing to them.  Suffering means nothing to them.  Their plans and agendas mean everything to them.  I wish it were not so but this is the world we live in.  These people will never stop until they get what they want or until they are forcibly removed from control of society.