Someone left a link on one of my Blog posts recently that discussed Jewish plans or Jewish intentions of world domination and also for the slaughter of non Jews that refused to behave in a way acceptable to Jews.  Here is that link, which I will be discussing in more detail in this post.

This post leads me to a conclusion which I have not fully understood before now but perhaps after reading this others who have their eyes wide open will see better and that is the question of why did Donald J. Trump become President in 2016?  More specifically, in a completely rigged political system as the U.S. political system is, why did Trump become President?  It certainly was not because of the will of the American people or just because so many people hated Hillary.  No, it goes deeper than that.

Although it is not well known by most people, Israel and Jews turned against U.S. President Barak Obama because Obama was calling out Israel and Jews for their behavior and attempting to hold them to some account for it, at least verbally.

Here is a link to an article by a Jewish Rabbi condemning Barak Obama for being against Israel:

What I am exploring here is why Donald Trump became President at all and who his Presidency really served.  Its to be noted that the U.S. Establishment, what some people refer to as the Deep State has controlled the Presidency since LBJ.  It controlled the Presidency up through Barak Obama.  It controls the current Presidency of Joe Biden.  It did not control the Presidency of Donald J. Trump.  This does not make Trump a good President serving the American people.  It just means that Donald Trump was an anomaly in the U.S. political system that the U.S. has not seen for decades and probably will not be seeing again.  But the real question is why Trump who was clearly an outsider to the U.S. Establishment was allowed to become President.  The wrong answer is because his election was the will of the American people.  Nope.  I used to believe that was the case but no longer.  Something else entirely explains his Presidency and why Hillary Clinton did not become President.  I say the reason for Clinton\’s loss and for Trump\’s win had more to do with Barak Obama and Israel than anything else.

Israel expects world leaders to bow down to it and when they don\’t Israel gets directly involved in undermining the position of the world leader to ensure that future world leaders in that country will be subservient to Israel and definitely are not anti-Israel or opposing Israeli will.  This is especially true in the USA.  The last U.S. President to oppose Israel ended up dead with a head shot by his own wife, but that drastic step was taken only because JFK was directly threatening the National Security of Israel by his opposition to nuclear weapons being developed at Dimona.

In the case of Barak Obama he was not threatening Israel\’s existence but he was verbally critical of Israeli behavior and for a U.S. President to be critical of Israel was totally unacceptable to Israel.  Israel became opposed to Obama in 2014 and by 2015 Israel viewed Obama as an enemy.  Of course the American public who are told what to think and believe by the Jewish owned media were told none of this but its a fact that Israel viewed Obama as its enemy.  See the following Jewish document that concerns Obama as an enemy of Israel along with others.  Click on the below image. 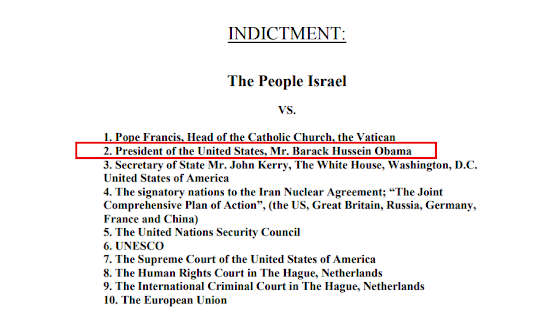 Note that this document is by the Jewish Sanhedrin, the very same Sanhedrin that Jesus said was part of the Synagogue of Satan and the very same Sanhedrin that later acted to ensure that Jesus was condemned to death by the Romans.  The Romans were intent on setting Jesus free but the Sanhedrin insisted he be crucified.  Yes, that Sanhedrin.  It still exists today and in 2015 it was against not just Barak Obama but also Secretary of State Kerry and others associated with the U.S. Administration.  If anyone wants to understand the real reason why Trump became President in 2017 they need to look no further than this document.  Its not about Democracy or the will of the people at all.  That is just an illusion.  Its about pleasing Israel and other power players in the world.

Hillary Clinton and what would have become her Administration in 2017 had become President was way too similar to that of Obama.  After Obama, Israel demanded that one of its own that was going to bend over backwards for Israel would become the next POTUS and that person was Donald J. Trump.

I do not need to list everything that Trump did for Israel here but the two main things Trump did was:

1) Unilaterally give Jerusalem to Israel, something that any other U.S. President would have been 100% against.

2) Unilaterally give the Golan Heights (Syrian territory) to Israel, something that no other U.S. President would have done.

Trump was Israel\’s choice to become U.S. President so Trump could be very very good to Israel and make up for what Obama did.  As a former Trump supporter I find it completely disgusting that I was deceived by Trump to believe that he was going to work for America when he did not work for America even once.  His loyalty from the beginning despite his MAGA campaign slogan was never to make America great again.  Trump does not give a fuck about America except to use it as his own personal platform to serve his huge ego.  Hillary would have been a better President than Trump.  I hate to say that but I believe it with all my heart at this point.  The amount of dishonesty at work here is mind staggering.