Another video to watch concerning the Covid 19 scam 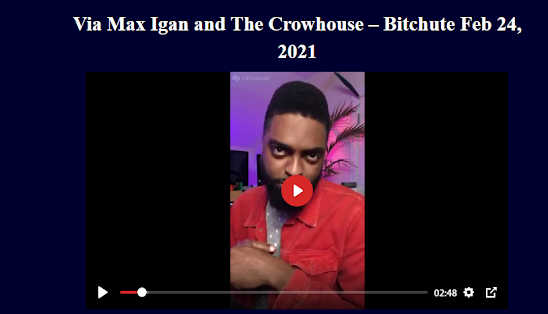 The Pharmaceutical Industry does not make money off a healthy person.  They make money off a perpetually sick person.  The sicker people are, the more money is made.  Its not about keeping people healthy.  Its not about Truth.  Its about marketing a lie so that a certain class of people make as much money as possible.  As sad as it is to talk about, this is where we are at 2021, and its going to get worse.  Are you ready to fight yet?  No?  Just wait.   The time is coming when a bad reality will force you out of your complacency.

One of the big things that this video presents is that the vaccinations which are supposed to be about ending the Covid 19 threat in reality have nothing to do with Covid 19 other than that Covid 19 is the deception that is being used to get the public to take these injections into their bodies.  What is being said is that these injections have a completely different purpose unrelated to Covid 19 and that the general public has been told nothing about this but the people behind the vaccination programs are fully aware of it.   This discussion starts at around the 40 minute mark in this video and I highly recommend you watch that part because its significance cannot be overstated.

(((They))) are seeking to gain control over the human mind, body and will using technology.

This may sound like an incredible claim to some but I fully agree with it.

EDIT TO ADD:  I feel like I am living in an especially evil episode of the Twilight Zone.  I have no words to describe this.  Its too horrible to even be described.  If you don\’t know that the bad guys are in control of the world by now, its time to wake up.  This world could be a good world.  It was meant to be a good world.  But bad people have gotten control of the world and they are using that control to transform the entire world into a bad place for everyone else.  Its that simple.  These bad people are in the process of transforming the entire world into something alien and so radical and different than it has ever been and was ever meant to be.  If you are not alarmed by what is happening then you are asleep and not paying attention at all.  If you don\’t know that the only way these bad people will ever be defeated is to go war against them then you are asleep.  The people behind this will never quit as long as they are in control of the world.   The time for being complacent is at an end.  We are at the point now that the future of the Human race is in great danger of being altered forever and changed from its God given form into something perverted that serves evil men.  If there was ever time to go to war, this is it.  And the enemy is not located on some foreign shore but is right here in inside your own country in control of the Government and the media and the \”Health\” industry and everything else.  That is what is so insidious about this.  The enemy is in control of everything except for us, but that is not good enough for them.  The enemy wants control of us too by hijacking our own bodies.  Unless we fight back, Humanity is going to fall into a very dark place.  I said it will get worse than this and it will.  Unless we resist, this is only the beginning.  The control freaks want it all and they will get it all unless we organize and resist and fight back.  We are losing this war simply because we don\’t recognize it as a war.  We have been deceived as to the true nature of what is happening but the time for being deceived is at an end.  We have three choices:

Fighting back and living free.