Click on the image of the Jewish War Criminal Below: 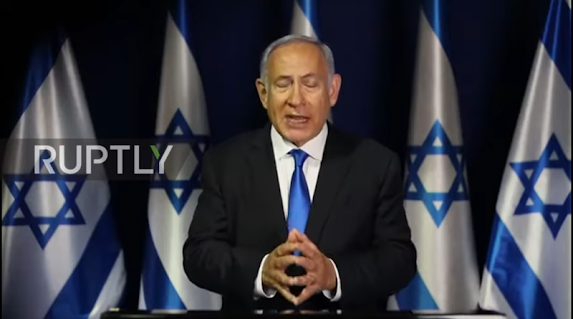 Its not surprising at all to hear this from the Jewish War Criminal named Benjamin Natanyahu.  The claim of Anti-Semitism is a bold face lie wherever it is used and this is no exception.  The lie is that people are against Jews because of their race, i.e. it is due to racial bigotry and nothing else.  Jews themselves know this to be a lie but they play the Anti-Semitism card whenever and wherever they can to portray themselves as perpetual victims of racial bigotry and hatred instead of evil doers who are hated because of Jewish behavior.  What is really sad is the number of non Jews who jump onto the anti Semitism wagon just because it is politically correct to do so.  For example, if I try to post a link to this Blog on some other truth telling Blogs it gets deleted because my Blog is deemed anti Semitic and thus my comments and links cannot be allowed because they are considered hate speech simply because I tell the truth about Jewish Behavior.  Let me say loud and clear what others before me have said, which is that if Jews were not evil lying bastards there would be no \”Anti-Semitism\”.  Jews and Israel have the worst behavior in the world and anyone who complains about their behavior is labeled a bigot.  Well I am not going to play that game.  On this Blog I talk about bad Jewish Behavior.  If the Jewish race is hated, they have brought that hatred upon themselves by their own behavior.  They can cry Anti-Semitism all they want but we all know the game they are playing.  At least those of us who are honest enough to admit it and are not afraid of being labeled politically incorrect admit it.  Unfortunately people like Caitlin Johnstone are so afraid of being labeled anti-Semitic that they will even touch anything critical of Jews or Israel.  Caitlin and others of her ilk blame everyone else except the Jews, who they are afraid to criticize.  Well, I am not afraid.