For those of you who are not aware of Crazy Days and Crazy Nights, it is a Blog by an anonymous entertainment lawyer who makes posts in very cryptic terms more in the form of clues for readers to figure out on their own instead of saying things explicitly.  By looking at the comments of each post the readers give their interpretations of what the post means.  It is a somewhat interesting Blog to read and try to understand the cryptic meanings of the wording used but I have not trusted the author of the Blog to be an honest person because when I think of a Hollywood entertainment lawyer, I think Jew and I have a great distrust of Jews.  But the person behind the Blog has outed some bad guys in some of his posts which makes me think he (I assume it is a he) is on the side of good.  His Blind Item Post #12 is of particular interest to me and one I want to discuss in this post. 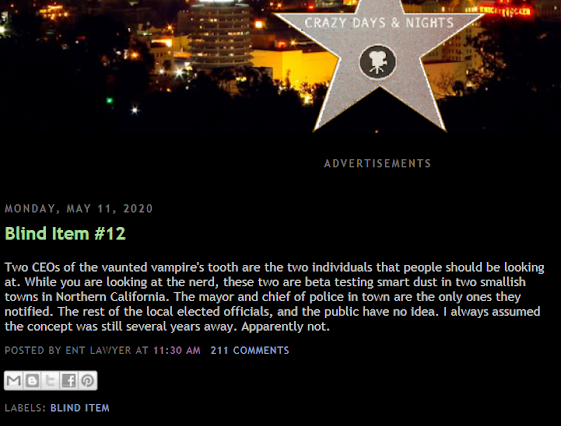 In this post I will give my own interpretation of what he says and discuss what it means.

A vampire is a malicious predator who pretends not to be so it can gain the trust of its victims to exploit them for its own selfish desire.   IMO this is a perfect description of the Jewish Snake which I have talked about in various posts on this Blog.  Like a vampire, the Jewish Snake is a malicious predator that cares only about itself but is very careful to hide that fact from its potential victims.  It pretends to be not a predator to gain the trust of the clueless people, and after that trust has been built up it exploits that trust for its own selfish purposes while keeping what is doing hidden from the people.
A vampire\’s tooth is a part of a vampire that serves its parent.  It can be a minion.  It can be one of the lower levels of a Hierarchy serving the higher levels.  IMO he is talking about the Silicon Valley technology companies such as Google and Facebook when he says Vampire Tooth.  These technology companies all work in lock step to serve a higher master beyond simple greed.  They are not independent agents but they are all following a script that is dictated to them from those above them in the Snake Hierarchy.
So the two CEO\’s could very well be the CEO of Google and the CEO of Facebook.  The nerd is clearly Bill Gates, who is in my opinion is very much of a front man in the Establishment agenda instead of the real source of what is happening.  There is an agenda at foot to paint Bill Gates as the real bad guy in the Covid 19 Plandemic but IMO he just hides the real people behind it whose names are never talked about and probably never will be talked about.  The same applies to Dr. Fauci.  Gates and Fauci are just the front men for the public to hate on while the true perpetrators on the plandemic hide in the shadows and watch everything happening so they can adjust their plan (tweak it) day by day.  This is the dishonest world we live in.
I talked about Smart Dust in the previous post, which are small metallic particles that can be absorbed into the body and used to identify a person on a mobile internet network like 5G.  Its a way to track a person whenever they are in a 5G network zone.  According to this item from May 2020, they were Beta testing smart dust in two Northern California towns.  Why Northern California?  Because the Silicon Valley Tech companies who are using this new technology are located in North California.  What does Beta testing mean?  The author does not tell us but I interpret it to mean that they dropped this smart dust from planes over these towns, which are described as smallish.  Why smallish?  Because its easier to monitor a small population than a large one.  People breathing this dust into their nasal cavity would get this particles absorbed into their body.
I imagine that these towns in Northern California are hooked up to the 5G network more so than other towns so that it is easier to perform these tests.  How would they test?  Again it is just my guess but they are developing technology that can be used to track a person uniquely just by that person physically being in a 5G zone.  Since they are developing the new technology to be implemented on a large scale in the future they have ways to monitor how many of the town\’s population showed up on the network after the dust was dropped.
As for the mayor and the chief of police of the towns being the only ones notified, this makes sense for security reasons.  The less people who know what is going on the less chance that someone will become a whistle blower against what is happening.  But in this environment whistle blowers against the Establishment end up dead by suicide or car accident or being killed by a mysterious intruder or get killed in a mysterious fire.   We can assume that the Mayor and the Chief of Police are being blackmailed and or watched so that if they ever did try to talk they and their families would end up dead.  This is the world we live in.
Now that I have given my interpretation of this CDAN post, here are some comments on that post that I find noteworthy:
Comment number one:
Vaunted Vampire\’s Tooth = FAANG.
Facebook
Amazon
Apple
Netflix
Google
So take your pick: Zuck/Bezos/Pichai/Cook