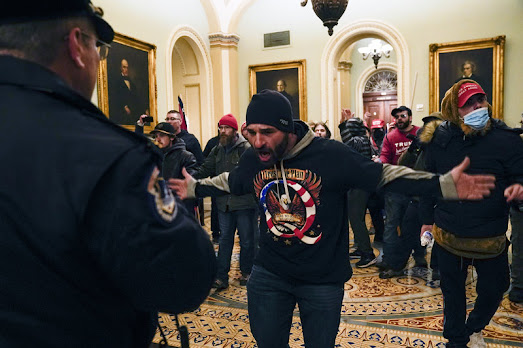 I am not surprised by this.  In fact, nothing that happens surprises me anymore.  I expect bad things to happen in a world like this.

Perhaps I can understand the thinking of Trump supporters such as the ones in the above image.  They believe that the electoral process has been subverted and that an election that should have been Trump\’s has gone to Biden instead.  They are outraged.  They are rioting and revolting in response.  Unfortunately, these people are misguided.

1,  Trump is a Snake and has been a HORRIBLE President.  Why fight to defend him?  I could see defending him if he actually did something for America but he did nothing but Tweet.  He does not deserve another four years of the same.

2.  The entire American political process is owned by Jewish interests.  It was this way long ago and it is certainly this way now.  Whoever wins serves Jewish interests and the Jews make damn well sure of it.  Nobody who is hostile towards Jews stands of chance of getting in the White House.  Only Jewish puppets become President.  So stop crying Trump supporters and wake the fuck up.

3.  There are reasons to Revolt against the System but this is not one of them.  If you are going to revolt, revolt for the right reason, not in defense of a lying Jewish scumbag like Trump.

4.  Trump is directly to blame for this violence.  He incited his followers to do this and then he accepts no blame for it afterwards.  Very typical behavior for a lying narcissist like Trump who wraps himself in the American Flag when he is really just a selfish Bastard who wants to remain in the White House for his own Egotistical reasons.

5.  As a former Trump supporter, all I can tell current Trump supporters is that you have to wise up and realize that the man you are supporting is not worthy of being supported.   You have to wake up to Trump as I had to wake up.  He is not who he says he is.  He is a liar and deceiver who plays on your ignorance and uses your Patriotism to get you to support him personally.  See through his con game.

6.  I suspect that this rioting in Washington D.C. is not spontaneous but has been carefully planned in advance by the Jews who use Trump Supporters the same way as they use Antifa.  Its all controlled opposition being used to sway the opinion of the American public in a direction that the Jews will use in their favor to further divide Americans from each other.  IMO the above image was Staged meaning that these riots were planned and executed in the same way as the George Floyd riots were.  Never trust a lying scheming Jew not to be one.