So I saw that an earlier post of mine about Fleet White Jr. being at John at Patsy\’s 1980 wedding had been posted on another site and I thought I would do a brief revisit of that subject.  Here is the original post where I made that claim.

Just as an experiment, I decided to overlay both faces onto the same image in Photoshop to see them clearly side by side: 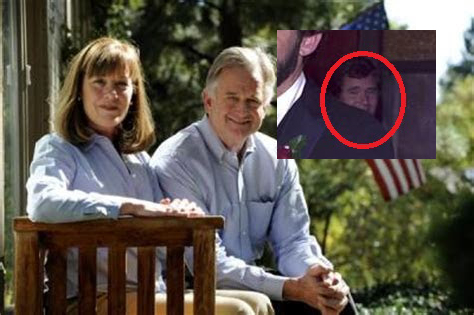 There is no doubt in my mind that the person in the two photographs is the same person, Fleet White Jr.  Fleet White Jr. attended the 1980 wedding of John and Patsy Ramsey in Atlanta GA.  John Ramsey lied when he said he and Patsy met the Whites for the first time in Boulder, Colorado in 1994.  John Ramsey and Fleet White Jr. have a hidden history before 1980 in Southern California. Nancy Krebs told the truth.

I have covered the JonBenet Ramsey case as much as I feel that I can with the information I have available to me.  There is no doubt in my mind that JonBenet Ramsey died outside of her home and her dead body was brought back to her home and a false crime scene was staged there to hide both the location and the true circumstances of her death.  A great miscarriage of justice has been done in the case of this child.  Fleet White Jr. was very heavily involved in the death of this child and his involvement has been covered up.  Fleet White Sr. was also involved and his links to the case have been hidden.  Everybody is lying to hide the truth.  As long as this continues, JonBenet will never get justice.  She deserves for the truth to be known.

I hope somebody reading this will bring some new information to the table that will lead to justice. After almost 25 years I am not counting on it but I am hoping.  I believe that a lot of people know what really happened and they are keeping silent.  The Whites are a wealthy powerful family whose name is being protected in all this but at what cost?  It sickens me to see how corruption is much more important than the truth in this world.