A Recipe for Wagging the Dog 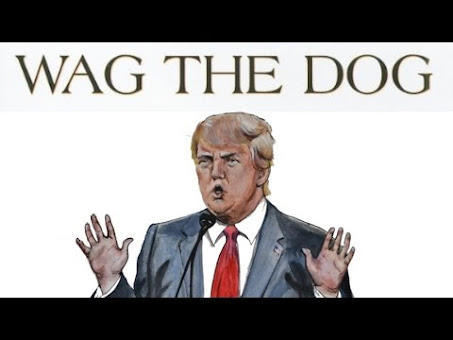 1.  An unpopular unpredictable lame duck President who from the very beginning of his term has been more interested in serving Israel than the American people.

2. The firing and replacing of Defense Department/Pentagon officials AFTER his election loss to remove anyone in authority who would be opposed to using the U.S. military in a way that would not serve America\’s best interests.

3.  A warning that America is vulnerable to cyber attacks and attacks on the U.S. power grid system.

4.  The assassination of Iran\’s top nuclear scientist and Iran\’s vow to retaliate that has been publicized in the western media.

5.  A United States of America that is under lock down and a forced quarantine. A nation of dumbed-down Sheep who are pawns for another false flag being foisted upon them out of the blue.

6.  A U.S. Naval armada sent to the Middle East under the pretext that Trump is going to reduce the U.S. military in Afghanistan and Syria.  Anybody believe that lie?

7.  A limited window of opportunity before January 20, 2021 when President Israel is forced out of the White House.

8.  A President who has been against Iran from the beginning of his term with repeated warnings of annihilation against them.

There is the Recipe for Wagging the Dog. Spelled out, what I am saying is that a False flag attack on the U.S. is about to happen that will be blamed on Iran.  The assassination of the Iranian nuclear scientist and Iran\’s vow to retaliate for it is setting the stage for this false flag.  Everything is done for a reason.  Moving the U.S. military back into the gulf at what should be the end of the Trump Administration is a red flag for anyone who is awake to see that they are setting the stage for something big.

If you see attacks on the internet and attacks on the U.S. power grid, etc. that are blamed on Iran, watch out because this will be the pretext for the U.S. to launch a massive military attack on Iran. What the snakes want is to turn the American people against Iran (which they will be doing 24-7 with their main stream media) so the American people support a war against Iran.  I do not know if this will happen or not but my eyes are wide open to it.

Another possibility is that they want to goad Iran into attacking a U.S. air craft carrier and possibly sink it in the Arabian Gulf.  Or they could sink a U.S. air craft carrier themselves and blame it on Iran.  However they will do it, what the snakes want is to give the U.S. military a pretext for a military attack on Iran between now and Jan 20, 2021 is my prediction.

It does not take a rocket scientist to see that Trump is a dishonest puppet who is up for whatever Israel wants him to do.  And with his election loss, he has nothing to lose by using the U.S. military to bomb the Hell of out of Iran while he is still POTUS.  All he has ever cared about is Israel anyway and by doing this he is serving Israel better than anything else he could possibly do.  Fuck the American people.  They do not count.  They have never counted.  What Israel wants is much more important than what the American people want.  The American people are blind dumb sheep who will believe whatever Israel… oops I meant CNN….tells them anyway so what does it matter?