The evil Jewish messiah, Sabbatai Zevi and Redemption through Sin:

In this post I want to get to a topic that I have been wanting to cover on my Blog for a long time.  As some of you may have noticed, a lot of posts recently have been about Satanism and Satanists and their control of organizations.  But this Blog is called \”Stranger in a Jewish world\” meaning that Jews control the world.  On one hand I say that Satanists control the world and on the other hand I say that Jews control the world.  What is the real relationship between Jews controlling the world and Satanists controlling the world?  As I have said, there is a relationship but its a very hidden one.  The relationship is deeply buried and secret so that most people see no relationship at all between Satanism and Judaism.  Well, in this post I want to start to create a linkage or connection between the two to see how they are related beneath the surface.

As you know, Jews rejected Jesus Christ as their messiah and had him crucified in Roman occupied Jerusalem but a man came along later who many Jews did accept as their messiah, Sabbatai Zevi. Here is the Wikipedia page about this man.  Please note that I hate and despise Wikipedia but in this case I will post this link. Since this is Wikipedia, do not expect it to tell any secrets that the Jews do not want told. That\’s okay though.  I will tell the secrets that Wikipedia will never tell.   .

A rendering of Sabbatai Zevi: 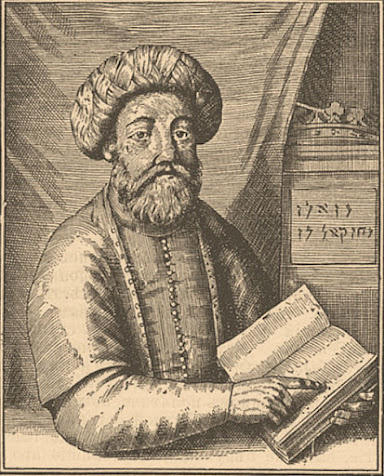 Sabbatai Zevi announced in Smyrna in 1666 that he was the Messiah. Zevi was the founder of Sabbatean movement.

Here is another Wikipedia link about the Sabbateans:  https://en.wikipedia.org/wiki/Sabbateans

According to that page, vast numbers of Jews accepted Sabbatai Zevi\’s claims of being the Jewish messiah. Over a million Jews worldwide became his followers.

One of the main things that Sabbatai Zevi said is Praised be He who permits the forbidden.

Sabbatai Zevi abolished the laws concerning sexual relationships. He eventually declared that all of the thirty six major biblical sins were now permitted and instructed some of his followers that it was their duty to perform such sins in order to hasten the Redemption.

According to Shabbatai Tzevi, the messianic days of the redemption were upon us and when this era arrived, god of the Sabbateans would permit everything. All the prohibitions by the God of Israel in the Torah would be rescinded in the new messianic era. In the Ten Commandments, it said, Do not kill but when the messiah comes, they were permitted to Kill. These same 10 commands also said, Do not commit adultery yet in when the messiah comes, it was said that you may commit adultery. These same commandments said, Remember the Seventh Day (Seventh-day Sabbath Shabbat) to keep it holy, yet when the messiah comes, any day you wish to worship could be your holy day. It was also the Chief Blessing of the followers of the false Jewish messiah, Shabbatai Tzevi, called Sabbateans, when they said, Blessed is he who permits the forbidden. This was their most profound blessing and it swept over half of the Jewish people in Europe within its clutches.

Sabbatai Zevi\’s movement thrived until he promised to overthrow the Caliph of Istanbul. The Caliph had him arrested him and gave him the choice of converting to Islam or execution. Sabbatai Zevi converted without hesitation, telling his followers to do the same, but of course their conversion was false.  In public they converted to Islam to avoid execution.  In private they retained their beliefs but they went underground and became secret.

The Doctrine of Redemption Through Sin 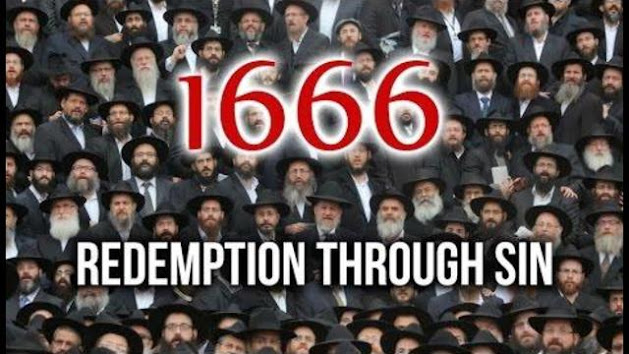 The basic philosophy of Shabbatai’s doctrine of redemption through sin was based on the teachings of Isaac Luria a century earlier. Robert Sepehr’s book, 1666–Redemption Through Sin, gives us a summary:

“Isaac Luria, whose interpretation of the Kabbalah is now most widely used and accepted, explained that God created the world by forming 10 vessels to hold the ‘Divine Light.’ God intended this original Light to radiate out, fill the world and illuminate everything around us. But as God poured the Light into the vessels, the Divine Light was so powerful that the vessels couldn’t contain it. With a huge explosion, the vessels shattered and sparks of this Divine Light became imbedded into the world of matter. The material world had trapped these sparks of Divine Light; God’s presence was hidden and unable to shine forth. It then became the task for us (presumably the chosen ones) to free these holy sparks.” (Sepehr, p. 10, 11)

Of course, this view is quite Gnostic, as it presumes that matter is evil and spirit is good. Luria’s interpretation was thus based on Gnostic Dualism of good vs. evil, light vs. darkness, and spirit vs. matter. It was their religious duty, then, to enter the world of sin in order to redeem the trapped particles of Light. In practice, this meant that the Sabbateans were required to engage in sin of every kind (most notably sexual orgies and conversion to false religions) in order to redeem the world. Prohibitions were interpreted as Permissions, as in the Satanic Black Mass.

Jacob Joseph Frank (1726 – 1791) was an 18th century Ashkenazi Jew who claimed to be the reincarnation of Sabbatai Zevi and also of King David.

A rendering of Jacob Frank: 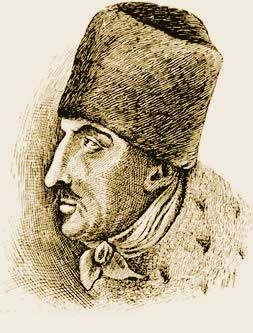 “Where Frank separated himself was by rejecting every moral law and commandment and declaring that the only way to a new society was through the total destruction of the present civilization. He insisted that child sacrifice, rape, incest and the drinking of blood were perfectly acceptable and necessary religious rituals.” (Sepehr, p. 20)
Frank would eventually enter into an alliance formed by Adam Weishaupt and Meyer Amshel Rothschild called the Order of the Illuminati. The objectives of this organization was to undermine the world\’s religions and power structures, in an effort to usher in a utopian era of global communism, which they would covertly rule by their hidden hand: the New World Order.
The Judengasse, the Jewish ghetto of Frankfurt am Main, Holy Roman Empire, was one of the earliest ghettos in Germany. It existed from 1462 until 1811 and was home to Germany’s largest Jewish community in early modern times. Initially, some 15 families with about 110 members lived in Frankfurt’s Judengasse when they were forcibly removed from the city and relocated to the ghetto by decree of Frederick III in 1462. Frederick III Holy Roman Emperor (1415 – 1493), a member of the Order of the Dragon also a member of the Order of the Garter, and married Eleanor de Aviz, Princess of Portugal, the daughter of Eleanor of Aragon, whose brother, Alfonso V King of Aragon and Naples, was a member of the Order of the Dragon. The central role of Frankfurt’s Jews in Jewish spiritual life is best illustrated in the Rabbinical Conference held in Frankfurt in 1603. Many of the most important Jewish communities in Germany, including Mainz, Fulda, Cologne and Koblenz, sent representatives to Frankfurt for this conference.

The most famous resident of the Judengasse was Amschel Mayer Bauer (1744-1812), who took on the name Rothschild to found the famous banking dynasty. The Rothschilds have been referred to as a “founding father of international finance,” and ranked seventh on the Forbes magazine list of “The Twenty Most Influential Businessmen of All Time” in 2005.[1] According to Rabbi Antelman in To Eliminate the Opiate, the Rothschilds were the true founders of the Bavarian Illuminati. The dynasty was founded by Amschel Mayer Bauer (1744-1812), who took on the name Rothschild, for “red shield” in German. According to Antelman, the Rothschilds were members of the Sabbatean sect known as the Frankists. Jacob Emden described a violent altercation that took place at his home with two defenders of the Frankists, one of them being Jacob Rothschild.[2] 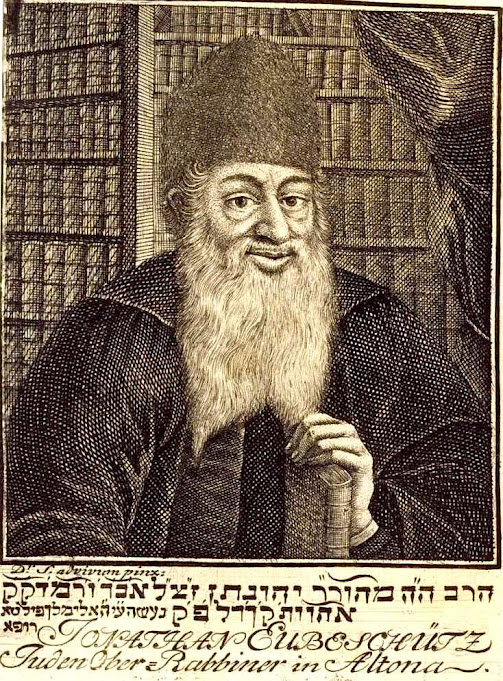 Rabbi Jacob Emden (1697–1776), a fierce opponent of the Sabbateans, is well known as a protagonist in the Emden-Eybeschütz Controversy, a momentous incident in Jewish history of the period, that followed the accusations against Rabbi Eybeshütz (1690 – 1764). As reported by Jewish historian Jacob Katz in Out of the Ghetto, a certificate held in the Schiff Collection at the New York Public Library, ranks Rabbi Eybeshütz as a successor of Sabbatai Zevi accofding to a list of ordination.[3] First to succeed him was Nathan of Gaza (1643 – 1680) who was anointed a prophet by Sabbatai Zevi. Next was Solomon Ayllon (1655 – 1729), his disciple and a Rabbi in London and Amsterdam where he tried to hide his Sabbatean leanings. Ayllon’s successor was Nechemiah Chiyon (1655 – 1729), who was excommunicated in several communities and wandered over Europe and North Africa. Chiyon ordained his successor Judah Leib Prossnitz in Moravia. Prossnitz was known as a Kabbalist and charlatan healer who confessed to sacrificing to the devil and demons, after which he was publicly banished into exile for several months. Following his ordination as successor to Zevi, after first proclaiming himself the Messiah, Judah Leib then passed on the title to Rabbi Eybeshütz (1690 – 1764).In 1751, Emden accused Eybeschütz of being a secret follower of Sabbetai Zevi, citing the evidence of some amulets written by Eybeschütz which contained Sabbatean formulas. In 1753, Eybeschütz was exonerated by the Council of the Four Lands in Poland, and his halakhic works remain in use today, despite strong suspicions among modern historians that Emden’s accusation may have been justified.
Using secret societies, such as the Freemasons and Skull and Bones, their agenda has played itself out over the centuries, staying true to the script.  The Illuminati handle opposition by a near total control of the world\’s media, academic opinion leaders, politicians and financiers.
More to come