That was the title of one of the threads at the WebSleuths forum that I saw before Tricia, the Gatekeeper Administrator of that forum permanently banned my account there for spreading Anti-Establishment truth on her forum.  Although Tricia herself is a completely dishonest person who administers her forums so she can control the information that gets posted there, there are many good honest people on the WebSleuths forum who do care about the truth and are willing to follow it wherever it leads.  Such is the person who created the thread called \”Lies expose the Truth\” and indeed they do.  I have said the same thing in different words on various posts in this Blog.  In this post I want to talk about some lies that have been told and the truth that they expose.

I consider John Ramsey to be a Pathological liar of the worst kind.  Since the death of his daughter this man has told every lie he possibly can to cover up the truth.  The book he co wrote with Patsy called \”Death of Innocence\” is full of lies from the top to the bottom.  That entire book is a lie factory but in this post I want to examine some of the lies told by John Ramsey and the truth that they expose.  The truth is not always easy to see.  It is usually buried underneath a mountain of lies and red herrings and only the most perceptive of people who have connected all the right dots will be able to see it.  Today I saw something clearly for the first time about this case.  It is a truth that is hidden in plain sight but I have been unable to see it as clearly as I did today despite years of looking at this case from every possible angle to try to determine what the truth is.

In \”Death of Innocence\”, John Ramsey said that he and Patsy first met Fleet White Jr and his wife Priscilla in 1994 where the Whites were living in a small rental house.  They quickly became the best of friends and did a lot of social activities together such as skiing together in Aspen, Colorado.  Although John Ramsey had money, Fleet and Priscilla were poor and John Ramsey had to foot the bill for all the expensive travelling and social activities they did together.  John said as far as he knew, Fleet\’s father might have owned a gas station in California but that\’s it.  So according to John Ramsey, the Whites don\’t have any money and Fleet White Sr. just owns a gas station in California and is not rich by any means.

Those are the lies that have been told and they are obvious lies for anyone who has done any research at all into the history of Fleet White Jr and Fleet White Sr as I have done extensively on this Blog.  Let me document the lies one by one and then correct them with the truth.

Lie Number 2:  Fleet White Jr and Priscilla White were just some poor anonymous couple living in a small rental house in 1994 in Boulder Colorado.  In fact Fleet White Jr and Priscilla were neither poor nor anonymous. Fleet White Jr. was the son of a wealthy oil magnate from California who was a partner in his father\’s oil company, Fleet Oil Company.  Priscilla White was the daughter of the chairman of the board of Century Financial Corp. and immediate past president of the USC Alumni Assn.  Fleet and Priscilla White were children of wealthy families whose parents held leadership roles in big important companies.  Neither of them was poor nor was either of them anonymous.  Fleet Oil Company was expanding its operations from Southern California into Colorado in the early 1990\’s and Fleet White Jr. was in Colorado to oversee and manage the expansion as a partner of his father\’s company.  He was an oil magnate himself in Colorado just as his father was in California.  There is no way that either of them would be living in a small rental house in Boulder in 1994 as John Ramsey says in \”Death of Innocence\”.  Instead they would be living in a big home and even a mansion because of the wealth of Fleet White\’s father and Fleet Oil company in Boulder, Colorado.  So this is a direct lie by John Ramsey to conceal the truth about the circumstances and financial means of Fleet Jr. and Priscilla.  Later in this post I will describe why John Ramsey is lying about this.

Lie Number 3: Fleet and Priscilla were poor and John Ramsey had to foot the bill for the expensive travelling and social activities they did together, such as skiing together in Aspen Colorado in the below image: 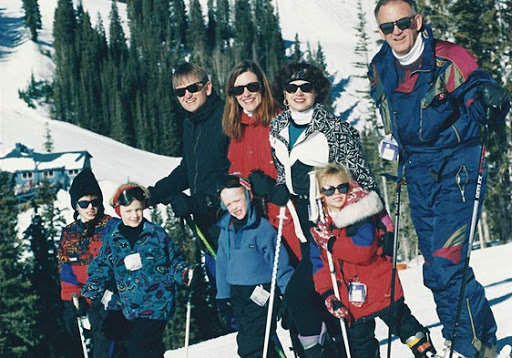 Fleet White Jr and Priscilla White were anything but poor and unable to pay their own way in these social activities.  In fact, Fleet and Priscilla were wealthy socialites similar to Fleet White Sr and Nyla White.  Fleet White Jr. knew how to ski because his parents owned a Chalet in Aspen Colorado since 1964 and took frequent trips there.  Every year they held a big New Years eve party in Aspen, Colorado.  Activities such as skiing and sailing had been a part of the White family for a long time and in fact was a family tradition.  Again, John Ramsey is telling a complete lie about the Whites to portray them as poor nobodies when in reality they were rich somebodies who were the children of rich somebodies.

Lie Number 4: John said as far as he knew, Fleet\’s father might have owned a gas station in California but that\’s it.  In fact, Fleet White Sr. owned a very successful oil and gas company called Fleet Oil Company in California that branched out into Colorado in the early 1990\’s.  John Ramsey was not ignorant of this fact because of his long association with Fleet White Jr.  Again, John Ramsey is telling a huge lie to hide who both Fleet White Jr. and Fleet White Sr. are.  He is part of a purposeful cover up of the truth.

Remember the lie told by John Ramsey that Fleet and Priscilla White were so poor that they were living in a small rental house in Boulder in 1994?  Now consider the home that we are told that Fleet and Priscilla White were living in at the time of the murder.  Although I cannot find it now, I once saw a picture of Fleet and Priscialla White photographed walking outside this home. It is just an average sized suburban type home that was much smaller than the home owned by John and Patsy Ramsey in 1996.  Just as in the case of the small rental house, this home is not the type of home that would be lived in by a rich family who themselves were children from rich families.  Although the official story says that this is the home the Whites lived in on Christmas 1996, I contend that this may be a lie and part of the cover up.

This is not the home that a wealthy family like the Whites would live in.  Instead they would live in a much larger home that was as large or even larger and more expensive than the home the Ramsey\’s lived in.  The Ramsey\’s home was large and although some people describe it as a mansion, it really was not.  I have seen mansions and the Ramsey home was no mansion.  But the home that Fleet and Priscilla White really lived in may well have been a mansion because Fleet White\’s parents were very wealthy international socialites and Fleet White Jr. was an executive with Fleet White Oil company in Boulder Colorado.  Although all this information has been carefully hidden from the public, it is a fact.

So I must reconsider what I said about the sex party happening inside the home of Fleet White Sr and Nyla White.  Which of the two following scenarios is more likely?

Scenario 1:  Fleet White Sr and Nyla White owned a mansion in Boulder, Colorado and hosted a Christmas day party in 1996 in this home that they owned.

I consider Scenario 2 to be much more likely after considering all the lies told by John Ramsey about Fleet White Jr.