Fleet White Jr. as a suspect in the death of JBR:

As I was reading the poem called the Manchurian Doll documented in the previous post, one line from this poem jumped out at me and that line is An elder cleric\’s errant son.  In the context of the poem where it was just talking about a Handler of a Monarch controlled child sex slave making an error and accidentally killing JonBenet, I can only think that this line is talking about this Handler.  The elder cleric is Fleet White Sr.  His errant son is Fleet White Jr.  So what the poem seems to be suggesting is that Fleet White Jr. was the person who was acting as the Handler for his father when he (Fleet White Jr.) accidentally strangled JBR to death.  It had never occurred to me before now that Fleet White Jr. could be the murderer but when I look at his behavior afterwards, especially the bizarre way he behaved during the Grand Jury proceedings, this has the ring of truth to it. 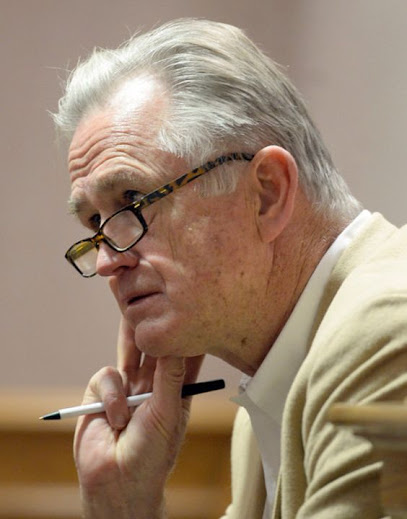 When I first saw this picture I thought it was Fleet White Sr. but this is actually a picture of Fleet White Jr.  Look at this man\’s face as he anxiously watches.  This man looks guilty to me.  I now consider him to be the prime suspect in the death of JBR.