Monarch Programming and the JBR Murder:

I feel compelled at this point to create a post about Monarch Programming in relationship to the JBR Murder.  In a previous post I introduced the concept of Monarch programming for those who are not familiar with it but in this post I want to relate this directly to the life and death of JonBenet Ramsey.  It is my very strong belief that Monarch mind control programming was being used on JonBenet and that this ties in to all the other information I have been discussing about this case.

The Parents of a Monarch programmed child benefit financially by prostituting the sex trained child to others.  It is my contention that John and Patsy Ramsey were benefiting financially from their daughter.  It is my contention that John Ramsey\’s business success was largely centered around his daughter\’s sexual use by others and also selling child pornography of her.  JonBenet was a very valuable sexual commodity for her father\’s ambitions.
In Monarch Programming, the children chosen come from multi-generational families.  It is my contention that JonBenet Ramsey\’s parent\’s families (the Bennett Ramsey Family and the Paugh Family) are both multi-generational families.
Lockheed has been named as a Monarch Programming center.  Access Graphics, the company that John Ramsey was President and CEO of was a subsidiary of Lockheed Martin.
In Monarch programming, the Monarch Slave\’s handler ordinarily carries a stun gun of up to 200,000 volts DC for torture, programming reinforcement, and especially for erasing memory of abuse.The Stun gun marks seen on JonBenet\’s body shows that a stun gun was being used on her as part of her Monarch Programming and reinforcement of it. I contend that JonBenet Ramsey was a Monarch mind controlled slave and that her father (John Bennett Ramsey) was her Owner and Handler.
Although it is very difficult to find any information about it on the internet because it is being memory holed, during a police search of the Ramsey home a video tape was found called something like \”How to create a sex slave using a Stun gun\” and this tape was reportedly associated with NASA. The existence of this tape was reportedly sealed under National Security reasons.  As I said on my Monarch Mind control post, NASA is one of the organizations involved in Monarch Mind control training so this explains why NASA would have produced such a tape as the one discovered in the Ramsey household.  I contend that John Ramsey and probably Patsy Ramsey too used a stun gun on JonBenet to mind control her and to reinforce her mind control programming.  That the tape was seized and omitted from evidence on National Security grounds is to be expected since the U.S. Government is deeply involved in Monarch Mind Control programming.  Going further, I contend that the reason for the cover up in this case was because the U.S. Government\’s role in Monarch Mind control programming could be revealed to the public and that could never be allowed.
EDIT TO ADD:  I came across a picture of JonBenet that I think is very suggestive about her being a Monarch mind control slave: 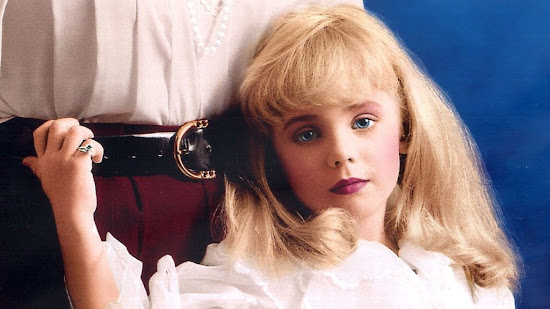 I contend that this is a picture of a Monarch Mind controlled slave with her Handler. Click on that picture to expand it.  If you look at her eyes, her pupils are dilated showing signs of possible drug use.  She looks completely helpless and dependent on her well dressed Handler who she has her finger inside his belt as a sign of total submission to this man who controls her.  She looks unhappy and hopeless as if she is trapped in a world completely outside of her control.  Although we do not see his face, her Handler is without doubt her own father, John Bennett Ramsey.  I contend that JonBenet had at least one other Handler outside of her father and that was Fleet Russell White Jr. Going further down the rabbit hole, it is my contention that Fleet Russell White Jr. accidentally killed JonBenet as she was being sexually abused by his father, Fleet Russell White Sr.