A word about the abduction of Johnny Gosch:

Johnny Gosch was a twelve year old boy who was abducted in 1982 while delivering newspapers.

Johnny Gosch\’s Mother, Noreen Gosch, hired Private Investigators to try to solve the mystery of her son\’s abduction.  Her investigators discovered a witness who had seen a man taking a photo of Johnny two weeks before his kidnapping. This information links back to Larry King and his associates in the Franklin Credit Union Scandal where Photographer Rusty Nelson describes \”catalog kids\”.  Pictures were taken of various kids and the pictures were shown to wealthy Elites to ask if they desired any of the kids they saw in the photographs and would they be willing to pay big money to own the kid in the photograph?  If they made a deal, then Larry King and associates would abduct the kid, enslave the kid and deliver the kid to the wealthy Elites for profit.  This information also links back to the Finders that was involved in the very same activity.  The Finders photographed various kids, showed the pictures to potential clients and if the client wanted a kid they would abduct the kid, enslave him using mind control, etc and then sell the kid to the client for profit.  All of this links together to form a comprehensive picture.  Do you begin to see it?

In case you have not comprehended it yet, Johnny Gosch is one of the kids who was sold to a wealthy client.  First he was photographed while delivering newspapers and shown to a client who desired him sexually.  A financial arrangement was made between the group behind it and the client.  The group behind it then forcibly abducted Johnny Gosch.  Before Johnny Gosch was delivered to the client, he was conditioned to make him easy for the client to control.  This involves many things which will be discussed later.  But after abducting him and conditioning him then Johnny Gosch was secretly delivered to this unknown client for a huge amount of money (I can only speculate about how much money a wealthy client would be willing to pay for this kind of thing) and then Johnny Gosch became a sex slave of the client.

A Stun Gun such as the one pictured below was used in the abduction of Johnny Gosch: 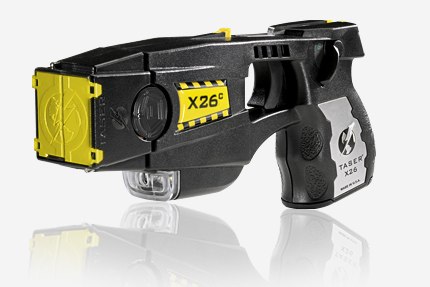