A Word about the Oklahoma City Bombing:

In another post I discuss how this was falsely blamed on Timothy McVeigh, who was in reality a Plant. 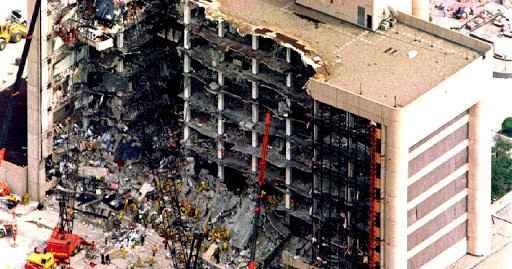 So what was the real reason behind this False Flag attack on the Alfred P. Murrah Federal Building in Oklahoma City, Oklahoma?  Perhaps many reasons but I believe that one of those reasons is that the destruction of that entire building was to stop honest U.S. Government Federal investigations into corruption in the United States of America.  When I say the U.S. Government is totally corrupt of course I do not mean that every single member of the U.S. Government is a lying dishonest Snake.  Far from it.  I believe there are many honest people working in the U.S. Government who are not part of the corruption.  But the leadership of the U.S. Government in all sectors has been infiltrated by lying snakes who are in bed with corruption.  So what I am suggesting is that one part of the U.S. Government that is corrupt played a role in this explosion.  According to eye witness testimony, U.S. Federal Troops arrived at the Building after the explosion and forced all the wounded and dying victims of this attack to the side as they gathered up all the paperwork that had been spread all over the place by the EXPLOSIONS.  The dead and dying people were not important to them at all but the paperwork on the ground clearly was.  And this gives us a clue about the reason or one of the reasons for the explosions, which was to prevent ongoing criminal cases being processed in that building from moving forward and going to eventual trial.  It was important enough to somebody to blow up the entire side of the building to stop those criminal cases from going forward is what I suspect.  And this topic of a Federal building being destroyed to destroy criminal investigation evidence leads directly to the topic of another building, Building 7 in 9-11 being destroyed for the same reason.  I will do a separate post about Building 7 and the evidence destruction component of it soon.  But in the case of the Murrah Building destruction and the destruction of Building 7 is the common denominator of a false flag/Deception attack being used as a cover for destruction of evidence against corrupt people.