A word about Satanism in the U.S. Military:

In a previous post I discussed the Franklin Credit Union scandal and how Republican fund raiser and operative Larry E. King had been a member of the U.S. Air Force for four years prior to the time he became involved in everything concerning the Franklin Scandal.  Photographer Larry Nelson said that Larry King was so well known at the Offutt Air Force Base in Omaha, Nebraska that he could just walk into the gate at any time no matter who he was with without ever being stopped by the guard(s).  Okay, assimilating this information and connecting it with other dots I have previously come across leads me to the topic of this post which is Satanism in the U.S. Military.  This relates directly to the Franklin Credit Union Scandal because, although it has been greatly downplayed by everyone discussing Franklin, I deduce that Satanism was heavily involved in the sexual abuse aspects of the scandal.  Other people have mentioned Offutt Air Force base in Omaha being involved in things such as Satanism, Mind Control, Snuff Films and child pornography so I suspect that some things have been going on and are very likely still going on in that Air Force Base but in this post I want to talk about Satanism not just in Offutt Air Force base but in the U.S. military in general.  Too many people have talked about this in the past to simply ignore it.  Satanism is an ugly frightening subject that most people do not even want to acknowledge is a reality but if we care about the truth in these matters then we must follow the truth wherever it leads and I very heavily suspect Satanism in the U.S. Military and in the U.S. Government itself.  I am not going to talk about Satanism in the Government here but just restrict this discussion to Satanism in the U.S. military.  Also in a previous post I discussed the difference between harmless Satanism in the False World and brutal violent murderous Satanism in the Real World.  In the discussion that follows I am talking about Satanism as it exists in the Real World and how the U.S. military has been infiltrated by it.
In the case of Larry King, I suspect that Larry King was recruited by and became involved in Satanism while serving in the U.S. Air Force and this is the reason why King became involved with all the things he did later on.  Things that Larry King became involved with in the Franklin Credit Union Scandal are sexual abuse of children, child prostitution, child pornography, snuff films, murder, mind control, and Blackmail among other things.  I note that Satanism in the Real World is involved in all the same things that Larry King became involved in as part of Franklin so I deduce that Larry King was directly involved with Satanism and Satanists as part of his activities in the Franklin Scandal.
In the picture below we see U.S. Military service people at a Satanists meeting of some kind: 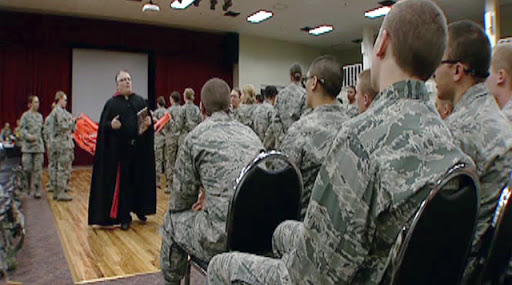 This is NOT the kind of Satanism in the military I am talking about.  The Satanism shown in the above picture is the benign False World Satanism.  It is not the real Satanism.
Colonel Michael Aquino, Satanist formerly in the U.S. Military: 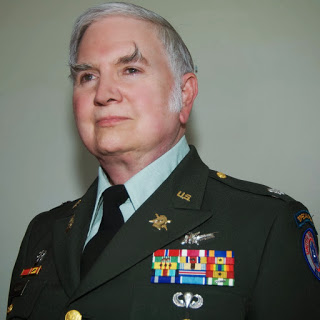 I am not sure where I stand on Mr. Aquino.  His picture is trotted out so many times on the internet that I get the feeling that he is just a front man for the real Satanists in the U.S. military. In my opinion he is just a false face for people to look at and possibly despise when it comes to Satanists in the U.S. Military just as George Soros is trotted out to be the front man for the International Jews.  I do not want to spend a lot of time talking about Aquino.  I went to look behind the false front of Aquino to see the true face of Satanism in the military.  If I am wrong and Aquino is more real than he appears to be then I will revise this but for now I want to bypass him as much as possible since I see him as a purposeful diversion that hides the real Satanists.  The real Satanists in the U.S. military hide in the shadows and they are never photographed like Colonel Aquino.  They do not admit to be Satanists as Colonel Aquino so proudly does.
More to come.