Two Worlds Paradigm
FALSE WORLD EXPLANATION:  Satanism is a Religion that is known mainly by Anton Lavey.  It is a peaceful, non-violent Religion that worships Satan instead of God.  Satanic Ritual Abuse (SRA) of children does not exist.
REAL WORLD EXPLANATION:  Satanism is not a Religion but is a way of life for many people.  The Satanism taught by Anton Lavey is not the real Satanism.  The Satanism taught by Anton Lavey is a false benign version of Satanism meant for the false world.  In the real world, Satanism is completely different from the Satanism as described by Anton Lavey.  Real world Satanism involves murder and human sacrifice and snuff films, among other things.  Satanic Ritual Abuse (SRA) of children is commonplace.
Satanic Symbol: 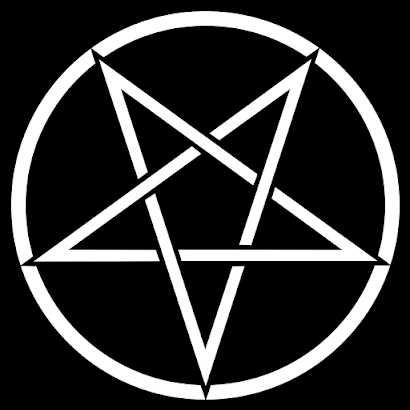 In this post I am going to describe some of the aspects of Satanism as it exists in the real world.  How do I know this information?  It comes from the mouths of people who have been involved in the real Satanism.  Let us call these some facts about real Satanism from the mouths of people who have been involved in it.  They are not in any particular order but just as I come across them.
Many cult members are highly sophisticated in the art of mind control and torture.  See this related post about Monarch Programming.
Satanists collect human blood in Bronze tins to be used in Satanic rituals.  The Bronze tins are ceremonial.  In other words they are used in Satanic ceremonies.  Satanists use Bronze tins containing human blood in their Satanic communions.  Always the exact same tins are used for collecting the blood and in the ceremonies.  Same size and same color tins are used in all cases.  In the Satanic ceremonies, Satanists drink from the tins containing human blood as part of the Satanic rituals.
Human fetuses and babies are placed into ceremonial boxes to be used in rituals in Satanic ceremonies.
Pureness for Satanic purposes is a total knowing rejection of Christ.
Incest is often involved in Satanism.  Incest between family members (Father-daughter, Grandfather-granddaughter, Uncle-Niece, Mother-son, Grandmother-Grandson) is very common in Satanic families.
Pedophilia is often involved in Satanism.
Sexual perversion of all kinds is often involved in Satanism.
Ritual Sexual Abuse of children is extremely common in Satanism.
Homosexuality is frequently involved in Satanism.
The kidnapping and selling of children to wealthy clients for profit.
The Production and selling of Snuff films to wealthy clients for profit.
The Production and selling of Child Pornography to wealthy clients for profit.
The Recruitment and sexual training of children using kidnapping, mind control and any other method.
Child Prostitution to wealthy clients for profit.
Using sexually trained children for Blackmail purposes. For example, using a trained child prostitute to purposely set up and then Blackmail a U.S. Politician to silence and control him or her.
Note that Law Enforcement Agencies (FBI, Police Departments, etc.) are often infiltrated by Satanists in leadership positions and the reason for this is logical.  Satanism is involved in secretive, highly illegal activities.  One of their main priorities is to remain secret and to not have any of their activities investigated and exposed by honest non corrupt LEA.  For this reason they make sure that the leadership positions of LEA are filled with people who are corrupt and will not pursue any investigation of Satanist activities should they ever come to light.  Satanists infiltrated into LEA leadership act as a cock block to any investigations and ensures that Satanists will not be investigated or prosecuted by LEA.  Understand this because you will see this infiltration of LEA across the board in the USA in the FBI and all major police departments. For example, Chiefs of Police Departments are one of the most common people to be corrupt and Satanist owned.  The same principal applies to other countries outside of the USA, for example in the UK or in Australia.  Satanism is practiced worldwide in many countries and in every country it is practiced in, Law Enforcement Agencies in that country are infiltrated by corrupt, Satanist owned people.
An interesting document about Satanic Cults:  https://www.ncjrs.gov/pdffiles1/Photocopy/140554NCJRS.pdf