A word about the 43 Trillion Bankster Lawsuit and the murdering nanny:

Some of you may have already heard this story but supposedly back in 2012 during the Obama Administration an article was published by CNBC and other media organizations about a 43 trillion dollar lawsuit against Banksters by a mysterious entity called Spire Law Group.  Then supposedly on the very same day that an article about this was published by CNBC, two young children of a CNBC exec were supposedly brutally murdered by the children\’s nanny who was a trusted family friend.
The following link provides a good summary of the case:
http://parentadvocates.org/nicecontent/dsp_printable.cfm?articleID=8402
The following link is of the Lawsuit itself allegedly filed by the mysterious Spire Law Group:
https://www.scribd.com/document/111307429/Spire-Law-Federal-Complaint-in-New-York
All of this is the story that they want us to believe.  What they want us to believe is:
1) These Banksters were sued on behalf of the American people for 43 Trillion dollars by a law group.
2) On the very same day or the day after, two children were brutally murdered supposedly in reprisal for the article being printed.
In this post we are going to look into this a little bit deeper.  When I first heard about this, I believed it was legitimate.  Now I do not.  Now I believe the entire thing is a deception or a Psyop.  Let me give you some reasons why I doubt the legitimacy of this entire thing:
The Law group that supposedly filed the lawsuit seems very unreal.  I tried to research into it and it does not seem to be a real law group.  It appears to be just a front.
The Law suit itself has disappeared completely as if it never existed in reality.  It came out of nowhere and it disappeared back into nowhere.  It was not a real lawsuit but part of a bigger deception that I do not yet fully comprehend.
Now let us turn our attention to the murdering nanny.
Initially I 100% believed that this woman murdered these two young kids as presented by the media but now I do not.  Now I see the entire event as being as unreal as the Sandy Hook School shooting was.  Notice that this alleged murder and the alleged murder of the kids in Sandy Hook happened in 2012 during the Obama Administration.  Also I noticed that the two kids who were murdered by the nanny are JEWISH.  Yes, that is right.  The CNBC executive and his wife are Jewish and the two kids that the nanny murdered are also Jewish.  Remember what I said about Sandy Hook, which is that many or all of the supposedly murdered kids were Jewish?  Well lo and behold these kids supposedly murdered by the nanny are also Jewish.  This is not a coincidence.  Looking at the fake Sandy Hook School shooting and the murdering nanny incident side by side what we see are two false events.  Both events have Jewish children as victims.  Both occur in 2012.  Both are highly publicized media events.  Both are unreal.
Another thing that tells me it is unreal is when I watch footage of the nanny who supposedly murdered the two kids.  This woman shows no real emotion whatsoever as she is being sentenced.  I mean NO EMOTION AT ALL.  No tears.  No sadness.  Its like she does not really give a fuck about any of it.  She is just an actor on a stage for the cameras to film.
The murdering nanny who does not give a fuck: 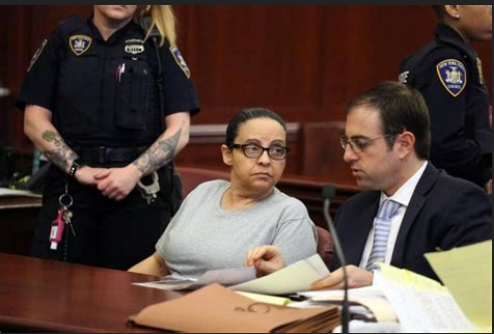 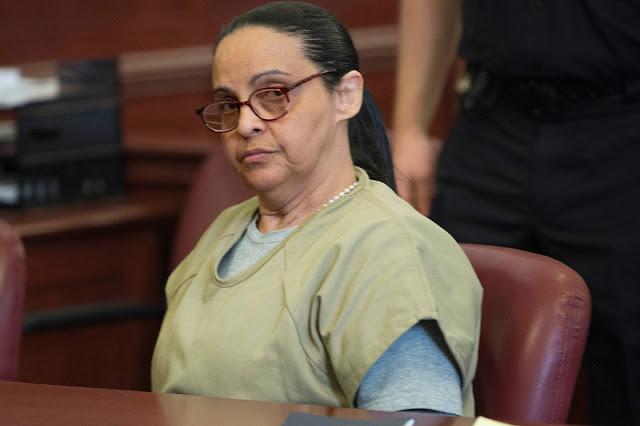 So I consider this entire event (the Bankster Law suit and the murdering nanny story) to be a big Jewish deception.  I do not comprehend the nature of the deception or what purpose they had in mind for doing this but I see it as a Zionist deception for some unknown purpose.
Just as with the fake Sandy Hook School Shooting, this entire episode reeks of being a Mossad Psyop.  Remember, Jews control both the state and the media, so staging deceptions like this is no problem for them.  It is up to us not to be deceived by their deceptions.