In this post I want to begin to touch on a subject I have become aware of, which is Jewish Ritual Murder.  This is a deep subject that Jews have done their very best to hide but I want to bring awareness of the subject to those who know nothing about it.

First, what exactly is meant by the term Jewish Ritual Murder?  It is the murder of non-Jews, especially Christian non-Jews by Jews to use their blood in rituals associated with the Jewish Religion.

Let me start by posting this article about the Jewish Ritual Murder of five Chicago white Children in the 1950\’s.  Consider this the beginning of going down a very deep rabbit hole.  Most people will not want to venture down this rabbit hole because many ugly disturbing things are to be found there. But for those who want to know the truth, there is no better way than learning about this subject.

Unfortunately incidents like this are still going on but in secret. Occasionally we hear news of them here and there but Jews do their very best to completely hide all publicity of them and prevent the general public from becoming aware of them. However Jewish Ritual Murder is extremely important to their Religion and that is why it continues to this day but in secret. Of course Jews do not call it Jewish Ritual Murder. They call it making Blood sacrifices to their God, whoever their God is. Ask yourself what kind of God would require human sacrifice? This is the God whom the Jews worship at the very highest levels of their Religion. And we Goyim are not supposed to know anything about it but we do. 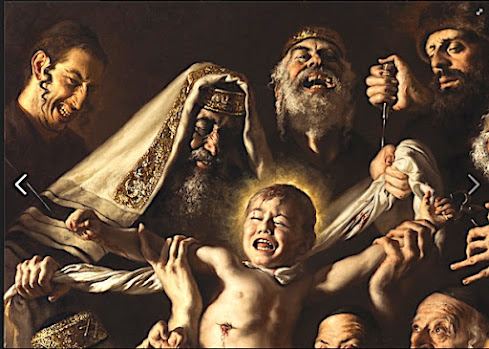