The Two Worlds Paradigm example of the Umbrella Man in the JFK assassination:

I made a previous post that showed that Jackie Kennedy was the assassin of her husband.  You can find that post here.  In this post I want to cover just one aspect of the assassination concerning the role of the so-called Umbrella man in the JFK assassination.

False World Explanation:  The Umbrella man was just a normal citizen who for some reason, perhaps because it was a sunny day, had an Umbrella up and was close to the Limousine as it passed the Stemmons freeway sign shortly before JFK was assassinated by Lee Harvey Oswald in Dallas Texas.

Real World Explanation:  The Umbrella man was a CIA agent who was holding a weapon disguised to look like an umbrella.  The following link shows this CIA created weapon:

This umbrella weapon system did not fire a bullet but instead fired a small dart (or flenchette) that was coated with a fast acting toxin.  This small dart was fired from the umbrella weapon into the front of JFK\’s throat as the Limousine was passing the Stemmons freeway sign.

In Zapruder frame 221 you can see how close the Umbrella was to the Limousine.  You can also see Jackie looking at JFK, indicating he has already been shot in the throat at this point.  Click on the image below to see these details. 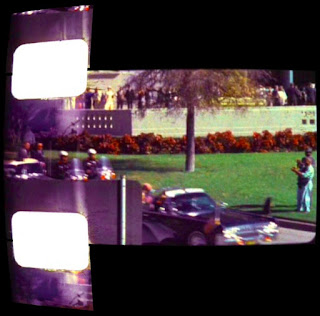 In subsequent frames of the Zapruder film we see JFK holding his hands to his throat where the dart has entered and then becoming incapacitated.

What was the purpose of firing the dart into JFK\’s throat?  To incapacitate him and make him helpless to resist or to be able to defend himself in any way from what Jackie was about to do. Had JFK not been incapacitated then it would have been impossible for Jackie to assassinate him the way she did without him being able to resist it.