Images from the Real World

In previous posts I talked about the Two Worlds Paradigm and how people are brainwashed and conditioned from birth to believe that a completely false world of lies and deception is the real world and to hide the existence of the real world so people do not even suspect that it exists.  On rare occasion images (pictures or videos) will be leaked from the Real World into the public domain of the False World.  When these images are seen by most people, they appear to be a mystery because they make no sense whatsoever in the false illusory world of lies and deception that we have all been conditioned to believe in.  These images only make sense relative to the world as it actually exists in reality.  Below are some examples of images of the Real World.

1)  The Zapruder film showing Jackie Kennedy assassinating her husband.  I already discussed this in detail in a previous post.

2)  The leaked video of the ISIS beheading that was taken on a CIA/Mossad sound stage.  Here is the video of that which was discovered on a device stolen from a John McCain staffer while in Ukraine:

3)  Now here is an image I consider as one of the most significant leaked images from the Real World.  As I said, this image appears to make no sense whatsoever in the world we have been taught to believe is real.   It only makes sense in a different world which I contend is the hidden real world.  What do you see when you look at this image?  I know what I see.  I call this one the Presidential Blow Job: 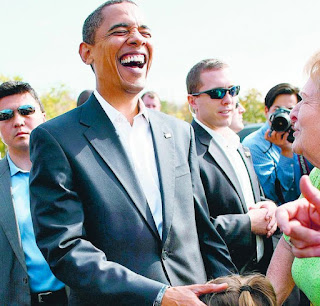 In the above image, what is more disturbing to me than what President Obama is doing is everyone around him who is complicit in the activity.