Two Worlds Paradigm Example of the Death of Gus Grissom:

False World Explanation:  Gus Grissom, one of the Apollo Astronauts died in a fiery explosion of an Apollo capsule along with two other Astronauts in an event called the Plugs Out Test.  This event was an accident that nobody at NASA could have foreseen.  Every attempt was made to save the lives of the three Astronauts but all three men burned to death despite the brave attempts by NASA personnel to save them.

Real World Explanation:  Gus Grissom was a whistle blower against NASA and the U.S. Government who, shortly before his death in 1967, attempted to inform the world that the Apollo program was a  lemon.  He did this by hanging a lemon on a clothes hanger on an Apollo capsule and making disparaging comments about NASA and the Apollo program during a press conference some three days before his death.  This was the reason for his death. 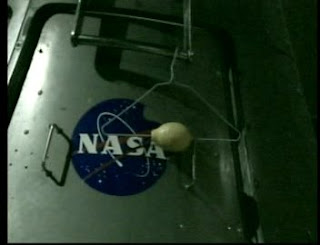 In revenge for this and other whistle blowing activities, Grissom was intentionally murdered.  Far from being an accident as NASA falsely claims, Grissom and the two other Astronauts were murdered to silence Grissom and to send a signal to anyone else involved in the Apollo program of the price for being a whistle blower against the corrupt United States Government.  No attempt was made to save the lives of the three Astronauts.  In fact, no attempt at all was made to open the hatch until it was certain that all three men were dead.  This was an act of premeditated murder. See the link below for details:

I suspect that Pat White, the wife of slain Astronaut Ed White, was murdered in association with this incident.