The Two Worlds Paradigm example of The George Floyd Murder:

Real World Explanation:  The murder of George Floyd was a State sponsored Psyop.  The name \”Derek Chauvin\’ is IMO not a real name at all but a fake name such as all the fake names used in the Sandy Hook School Shooting Psyop.  The name \”George Floyd\” may also be a completely fake name but is possible that a man named George Floyd exists but he is NOT the man shown in the video spread all over the internet with \”Derek Chauvin\’s\” knee on his neck.  That man is a crisis actor.  See image below: 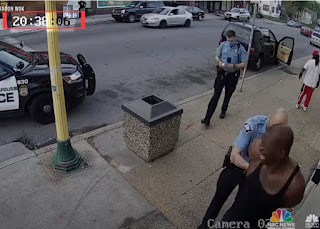 If George Floyd is a real person, and I can only assume he is, then he is NOT the person shown above and he is either not dead or, if he is dead, he died in some other way and not because of a knee being placed on his neck by a white cop.

The following is a site I recommend people look at to see details about the Psyop:

Agenda(s) of this Psyop:

1.  To cause racial division and strife between the Black and White Races.
2.  To distract people\’s attention away from real things that are going on at this time that go completely unreported on the Zionist owned MSM.